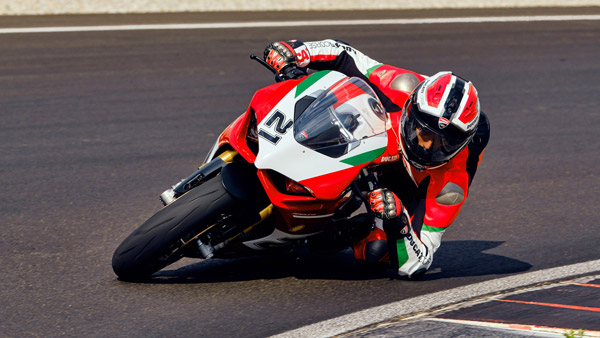 This motorcycle was introduced internationally in the month of September last year. Talking about the design of the Ducati Panigale V2 Bayliss 1st Championship 20th Anniversary Edition, it comes in a new livery with graphics inspired by the Ducati 996R.

Coming to the colours, it combines Ducati’s signature red with white and green, reflecting the company’s Bolognese roots. Troy Bayliss’ racing number 21 can be seen on the front and sides of the motorcycle while his signature is depicted on the fuel tank and seat.

It also gets red stitching, which has also been used in the Italian flag. Talking about the mechanicals of the bike, the Ducati Panigale V2 is similar to the Bayliss Anniversary standard Panigale V2, with fully adjustable new Ohlins suspension at both ends.

It gets 43 mm Ohlins NiX forks up front and an Ohlins TTX36 monoshock with an aluminum swingarm at the rear. The company has reduced the weight of this motorcycle to 3 kg and now its weight has become 197 kg.

Its seat height has also been reduced by 5 mm and now its height is 835 mm. Talking about the engine, it gets the same 955cc liquid-cooled L-twin desmodromic engine, which comes mated to a 6-speed gearbox. This engine produces 152 bhp power at 10,750rpm and 104Nm of torque at 9000rpm.