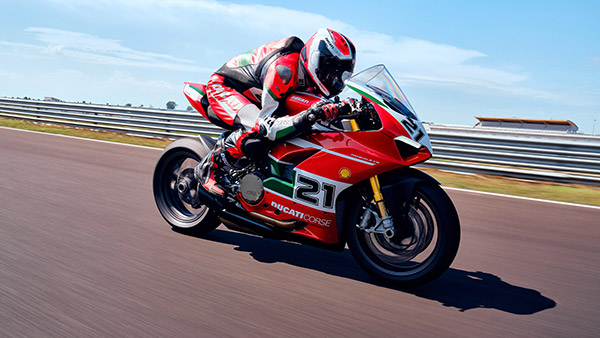 The price of Panigale V2 Bellis Edition in the international market is US$ 21,000, which translates to INR 15.62 Lakh in Indian currency. However, Ducati India will be importing its CBU model in India, so the price may be higher after including import tax. The company is expected to make it available at an ex-showroom price of Rs 17-18 lakh. Ducati Panigale V2 Standard Edition price in India is Rs.17 Lakh (ex-showroom).

Let us tell you that the main reason behind bringing the Panigale V2 ‘Bellis Edition’ is to pay tribute to the Australian motorcycle racer Troy Bayliss. The number 21 badge will be given on the seat and body panel of this bike, which was the number of Troy Bayliss motorcycle.

Talking about some of the key features of this bike, it gets projector LED headlight, LED tail light, LED indicator and LED DRL. The exhaust made of carbon fiber and titanium metal has been used in the bike. The bike has three riding modes with quick shifter.

For safety, the Panigale V2 Bellis Edition features Bosch cornering ABS, Ducati Traction Control, Power Mode, Ducati Wheelie Control and Auto Tire Calibration. The bike also has a 4.3-inch digital instrument display with Bluetooth and many other connectivity features. The bike has upside down telescopic forks at the front and monoshock suspension at the rear, which can be adjusted.

Let us know that after the Panigale V2 Bellis Edition, the company can launch Multistrada V2 and Scrambler 800 in India. According to the company, the Streetfighter V4 SP, 2022 Panigale V4, Streetfighter V2, Multistrada V4 Pikes Peak and XDiavel Poltrona Frau will be launched in the second quarter of this year. In the last months of 2022, the MY2022 Panigale V4SP and 2022 Ducati DesertX will be introduced.