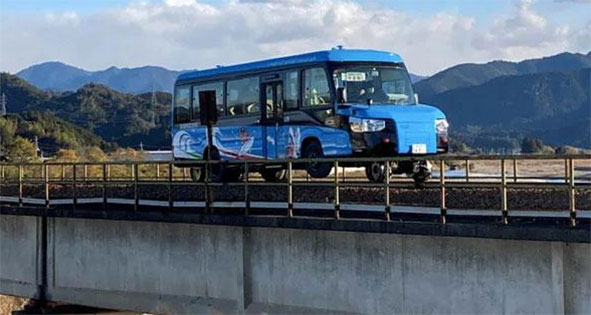 World’s First Dual-Mode Vehicle: Japan’s Asa Coast Railway Company has developed the latest DMV vehicle that can run both bus and train. It’s like a bus on the roads, it’s like a train on the tracks. It is the first dual mode vehicle in the world. These vehicles run on rubber tires when walking on the roads. At the railway track, the vehicle interchanges with Underbelly Automatic Adjustment technology and travels like an efficient train carriage with the help of steel wheels.

In addition, the front wheels go up and down the track, and the rear wheels go down to push on the railway track. The unique feature of this dual mode vehicle is that its tires are automatically adjusted to suit the roads and railway tracks and move as fast as the respective vehicles. The vehicle was also unveiled in public on Saturday in the town of Kaiyo in Tokushima Prefecture, Japan.