Dreams have no age, this old man bought his first car at the age of 83 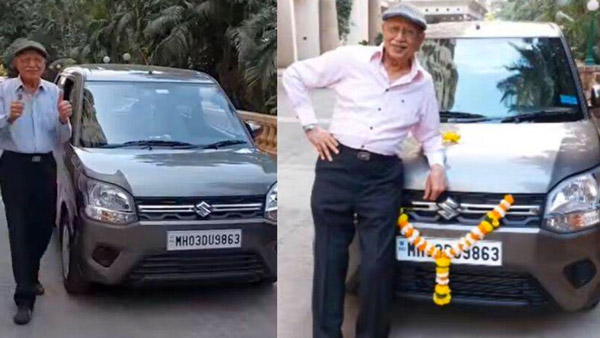 Although the person’s identity and name have not been revealed in the Instagram post, he has shared his happy experience of buying a car at this age, because people at this age usually shy away from driving.

In the post, the 83-year-old said that he was always fond of cars and wanted to buy a new car in his youthful days. However, due to family responsibilities and prioritizing the needs and wants of children above their dreams, they always settled for cheap used cars to save money.

After their kids settled down and they were blessed with a large family with six grandchildren, they decided to get a second used car for their basic needs. However, his children insisted that he should get a new car, as he is now eligible to have a new car.

A few months after this conversation, his children booked him a gray colored Maruti Suzuki Wagon-R. However, their children did not reveal anything about the exact date of delivery. On the occasion of his grandson’s 25th birthday on January 16, the man was taken by their children for an outdoor lunch.

However, instead of going back home, the family took the elderly man to the Maruti Suzuki showroom, where they were surprised to see his new car right in front of their eyes. This whole moment made the old man very surprised and emotional. After the delivery ceremony, the elderly man drove everyone around in his new Wagon-R.

The elderly man said that he has now fallen in love with this new era of new car ownership and would love to drive it everywhere. Apart from meeting his family members, he now wants to complete a road trip to Lonavala and spend time with his friends there.

He concluded by saying that although his grandson recently turned 25, he feels that his younger days of freedom and adventure have just begun. The person in this post isn’t the only older adult who preferred the Maruti Suzuki Wagon-R as their daily drive.

The compact tallboy hatchback from Maruti Suzuki is one of the most practical cars available. It offers good cabin space management, a light steering wheel setup with low turning radius and simple entry and exit, which are some of the qualities primarily preferred by older drivers.

Let us tell you that at present, two engine options are being given in Maruti Suzuki Wagon-R. These include 1.0-litre and 1.2-litre naturally aspirated petrol engines, mated to a 5-speed manual or 5-speed AMT gearbox.

The smaller engine also gets a CNG option in the base-spec Lxi trim. These mild updates are not likely to have any impact on the current prices. Currently, this car is being sold between Rs 5.18 lakh to Rs 6.58 lakh (ex-showroom, Delhi).