Do you know how much punishment you can get for pulling the chain of the train, this section seems to be 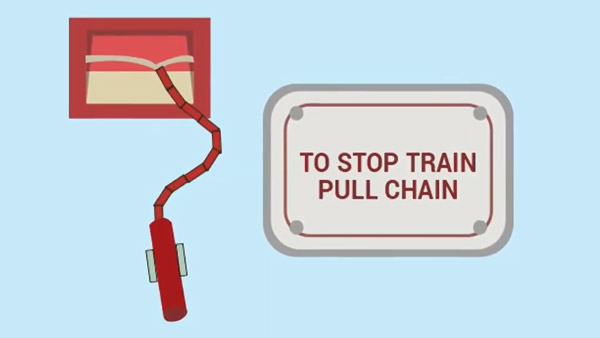 But in India, chain pulling is a serious issue in the railway system, as crooks use it to stop the train to land at their desired spots. Indian Railways has made serious laws and rules regarding chain pulling which should be known to all to avoid any penalty or serious legal action.

What is the role of loco pilot on chain pulling?

Indian Railways has updated its rules regarding the duty of loco pilots on chain pulling. Previously, the loco pilot was authorized to override the emergency brake, meaning the train would not stop when any passenger pulled the alarm chain multiple times.

But at present loco pilots can override the brakes only under certain circumstances. If the loco pilot overrides the brake system, such breach of work is liable to senior railway officials.

Can RPF know about chain pulling?

Have you ever wondered how RPF officers get into the exact coach after pulling the chain? Actually this is known from the emergency flashers installed on the side walls of the train. These flashers are installed in the coach from where the chain was pulled and as soon as the chain is pulled, a light of that coach turns on.

What are the real causes of chain pulling?

There are some genuine reasons for chain pulling, for which chain pulling of a train can be done. The first in this is a medical emergency. When a passenger needs immediate treatment, medicine or medical assistance like hospitalization in any area in the hospital or at any station.

Another reason is when the train catches on fire. In case of fire in the train, passengers can pull the chain from their coach. Apart from this, chain pulling can also be done in security emergency, such as chain pulling facility is available in case of robbery, dacoity etc. in Naxalite areas.

Apart from this, if you board a train with an elderly or disabled person and the train starts running, then chain pulling is not a crime at that time. There is a possibility that elderly and disabled persons take time to board the train. Deliberately pulling the chain to delay the train is an offence.

What is the punishment for chain pulling?

Section 141 of the Indian Railways Act states that “unnecessarily interfering with the means of communication in a train – If any passenger or any other person, without proper and sufficient cause, is by the railway administration of the passengers in the train and the railway servant in charge of the train.” uses or interferes with any means provided for communication between, he shall be punished with imprisonment for a term which may extend to one year, or with fine which may extend to one thousand rupees, or with both, can be punished.

Provided that, in the absence of special and sufficient reasons to be mentioned in the judgment of the Court, where a passenger, without good and sufficient cause, uses a chain chain provided by a railway administration, such punishment shall not be and shall be punishable with minimum punishment. Will be

In case of conviction for the first offence, a fine of five hundred rupees shall be imposed. Whereas, in case of conviction for a second or subsequent offence, the imprisonment may extend to three months. The section clearly states that if any person causes any disturbance in the smooth communication of Indian Railways by pulling the alarm chain, he shall be liable to legal action.