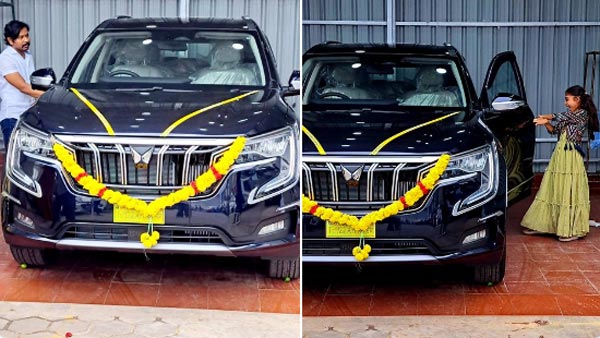 Posted on buying a car

Actually, Twitter user Thota Srikkanth recently bought a Mahindra XUV700, about which the family was very happy. Srikkanth made a post sharing some pictures to express the happiness of the family members. In this he tagged Anand Mahindra and wrote, “Brought home Mahindra XUV700 AX7L today, can see the joy on my daughter’s face.”

In the pictures, where Srikkanth is standing with the car, on the other hand his daughter is seen opening the car door. Seeing the new Mahindra SUV, there was no limit to the happiness on the face of that innocent girl and she smiled.

Industrialist Anand Mahindra shared pictures of Thota Srikkanth and his XUV700 on Twitter and wrote a heart-warming response. Sharing the tweet, Anand Mahindra wrote, Please tell your daughter that she made my day today. Along with this, Anand Mahindra also shared a smiley emoji.

Let us tell you that Mahindra XUV 700 is becoming very popular since its launch in India. The company is getting huge bookings for this 7-seater SUV. The XUV700 has been brought in several variants and gearbox options in petrol and diesel engine options. This SUV has been introduced with many new segment first features and attractive styling. It has been made available in India at an ex-showroom price of Rs 12.95 lakh.

Mahindra XUV700 is equipped with a new design with modern features. The XUV700 is the first SUV in its segment to feature a Mercedes-Benz inspired dual-display setup. This display acts as the infotainment system and instrument cluster. Features like wireless charging pad, dual-zone climate control, electronic parking brake with auto hold, keyless entry, push start/stop button have been provided in this SUV.

Talking about engine and power, the XUV700 has been given a choice of diesel and petrol engines. It is powered by a 2.2-litre diesel unit that is capable of generating 153 bhp power and 360 Nm of peak torque. On the other hand, the 2.0-litre M Stallion turbocharged petrol engine generates 188 bhp power and 380 newton meter torque. The car is offered with either an all wheel drive or a 4-wheel drive system in manual and automatic gearboxes.

Mahindra XUV700 has scored a 5 star safety rating in the Global NCAP crash test. With this rating, Mahindra’s new SUV has now joined the list of some of the safest cars in the country.