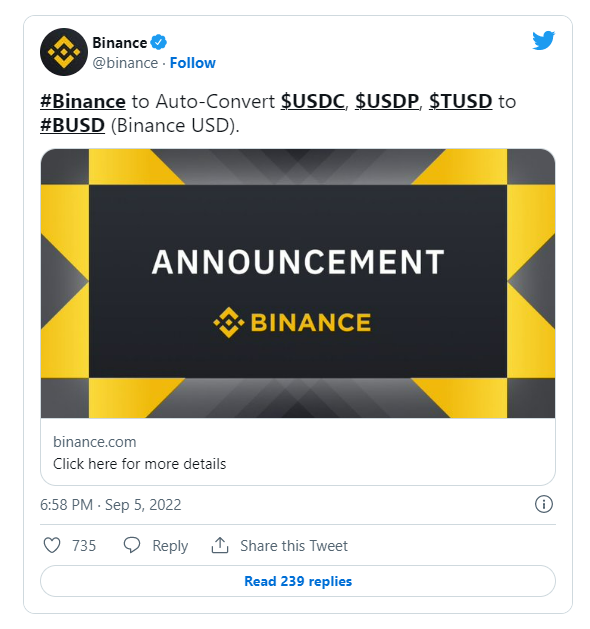 Cryptocurrency exchange Binance announced that it will convert the assets of its users in USDC, USDP and TUSD stablecoins into its own BUSD token. Automatic conversion will take place on September 29th.

According to Binance, this measure helps improve liquidity and capital efficiency for users.

“In order to improve liquidity and capital efficiency for users, Binance is introducing auto conversion for existing user balances and new deposits in USDC, USDP and TUSD stablecoins at a ratio of 1:1,” the exchange wrote on Twitter.

According to them, users will begin “trading a consolidated BUSD balance,” which will reflect their assets in four stablecoins.

“This will not affect the withdrawal choice, users can still withdraw funds in USDC, USDP and TUSD at a ratio of 1:1 to the balance of the account denominated in BUSD,” Binance emphasized.

In fact, Binance is removing the second-largest ($52 billion) USDC stablecoin from its platform. This could be a significant blow to the issuer of the Circle Internet Financial token. The exchange will also stop lending transactions with USDC.

Now BUSD, the crypto exchange’s own stablecoin, has a capitalization of $19.5 billion and ranks third in terms of capitalization among stablecoins. The market leader with a 44% share is still USDT from Tether. However, after the conversion of the second, fifth and sixth cryptocurrency by capitalization, the alignment of forces may change.