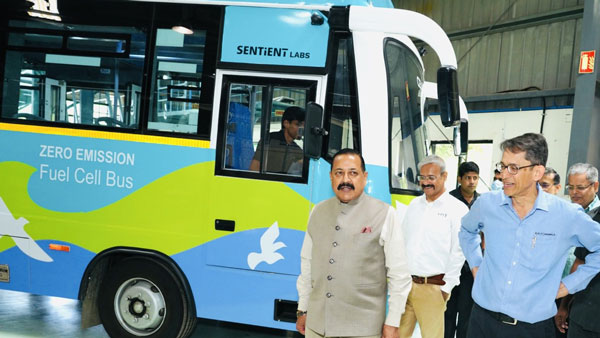 A diesel bus plying on long distance routes usually emits 100 tonnes of carbon dioxide (CO2) annually and there are over one million such buses in India. The operating cost of hydrogen fuel cell trucks is lower than that of trucks running on diesel and this could revolutionize the field of freight and transportation in the country.

The minister said that about 12-14 per cent of CO2 emissions come from diesel-powered heavy vehicles. Hydrogen fuel cell vehicles provide an excellent means to eliminate emissions on the road in this region.

What are Hydrogen Fuel Cell Vehicles

The technology of a hydrogen fuel cell vehicle is slightly different from that of an electric vehicle. In these, hydrogen fuel cells are used instead of batteries to produce electricity. A fuel cell is a tank of hydrogen that can be refilled when it runs out.

The hydrogen released from the fuel cell enters a chamber where it reacts with oxygen to generate electricity and emit water. From this electricity, the electric motor in the vehicle gets energy. In this process, the emission of carbon dioxide is zero, the emission of CO2 is zero.

It is being considered as the next generation fuel for global change. In depth, hydrogen fuel cells have a much higher energy density and can be fueled much faster than battery-powered vehicles. Fuel cell vehicles can be used for long distance experiments. Commercial vehicles (commercial vehicles) powered by hydrogen fuel cells can cover distances of up to 500 km on full tank hydrogen.

This technology has attracted the attention of governments around the world. Countries such as Japan, China, the US, Korea and parts of Europe are pushing for rapid adoption of hydrogen fuel cell technology.

India is also not too far in planning in this matter. The Central Government has announced a National Hydrogen Mission to make the country energy-independent in future and to make India a global center of green hydrogen production. Several Indian groups, including Tata, Reliance and Adani, have shown interest in supporting the mission.