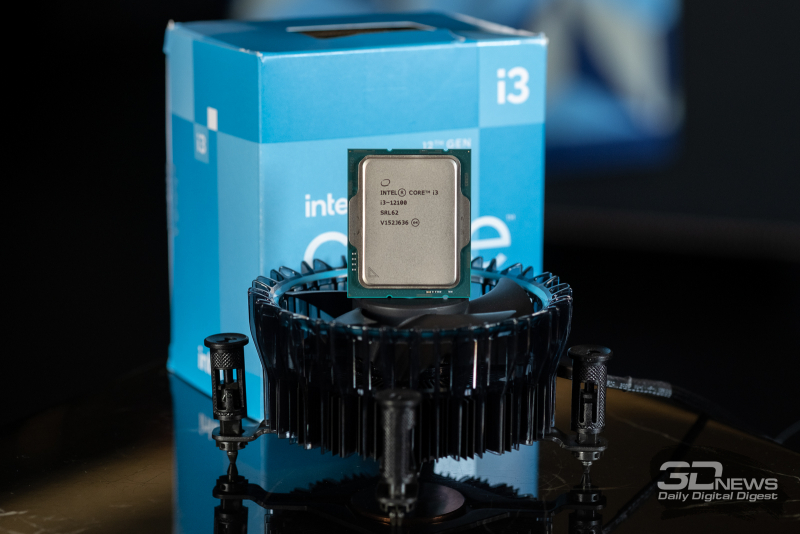 The news about the suspension of deliveries of American x86 processors to Russia came as a shock to the entire computer market. The looming prospect of the disappearance of modern desktop CPUs from the sale, together with sharp fluctuations in the ruble exchange rate, disrupted the usual rhythm of life and caused a rush of demand. Sellers immediately reacted to this, and prices rapidly went up – today processors are many times more expensive than just a couple of weeks ago. Under these conditions, more and more attention is beginning to attract such modern solutions that can still be bought for some more or less reasonable money. As is usually the case, among them there are more and less interesting options, but there are clear favorites, if you look at the ratio of price and performance. And among them, it seems,® Core™ i3.

Core i3 processors became full-fledged quad-core processors with support for Hyper-Threading technology back in mid-2020. And this can be considered a turning point in the evolution of the series, as its representatives  caught upat this moment, in terms of features and performance, the flagship models of the 2017 sample, for example, the Core i7-7700K. It is only natural that such Core i3 generations of Comet Lake, which first received the nuclear formula “four cores, eight threads”, have gained immense popularity as the basis of peppy budget configurations. Processors like the Core i3-10100 and i3-10300 became so popular with users that in the next iteration, when Intel switched to the Rocket Lake design, it even found it possible not to update the Core i3 at all and not introduce Cypress Cove cores in this series. Thus, the quad-core Comet Lake of the 2020 sample remained relevant until the very end of 2021.

But this year, the Core i3 still moved to a more modern design: they jumped over the step and, like other members of the Alder Lake family, received the most advanced Golden Cove computing cores made using the new Intel 7 process technology. Thanks to this, the new Core i3- The 12300 and i3-12100 have significantly increased the performance level compared to their predecessors, although their nuclear formula has not changed – they have not received additional cores. But the best part is that the two steps taken at once in the microarchitecture did not become a reason for changing the positioning: the new Core i3 retained the usual recommended prices – $143 and $122, respectively (or $97 for the Core i3-12100F version without integrated graphics). And although in our situation official prices have a rather remote relation to the real state of affairs, Core i3-12300 and i3-12100 can still be bought for some sane money. And doing it right now can be a completely justified decision – as we will show below, they are far superior in performance to all alternatives presented in the same price segment.

However, the fact that the quad-core Alder Lake simply does not have worthy competitors is clear almost immediately. AMD tried to capture the quad-core segment two years ago with the release of the Ryzen 3 3300Xwith the Zen 2 architecture. However, it was unable to supply the market with a sufficient number of such processors, and now they have almost completely disappeared from retail. And then the company generally considered this direction unpromising, and processors with four cores did not appear at all in the Ryzen 5000 series. Therefore, the new Core i3 will have to be compared first of all with higher-class solutions. In this review, which was prepared as part of a partnership project with Intel, we will see how the junior Alder Lake with four cores – the Core i3-12100 processor – compares to past six-core processors; answer the question whether four fast cores are enough for modern applications; and try to understand for what applications such a processor is best suited.

Although the Core i3-12100 belongs to the Alder Lake generation, it does not have much in common with flagship models like the Core i9-12900K . Of the sixteen cores, only four remain in it, there is no hybrid architecture  at all, as well as Thread Director technology. In other words, according to the general principles of the internal structure, the new Core i3 are similar to the processors of the same series of the Comet Lake generation – they have four identical computing cores with Hyper-Threading support. But these cores in the Core i3-12100 have a progressive Golden Cove microarchitecture, that is, they are similar to the P-cores of the older Alder Lake. 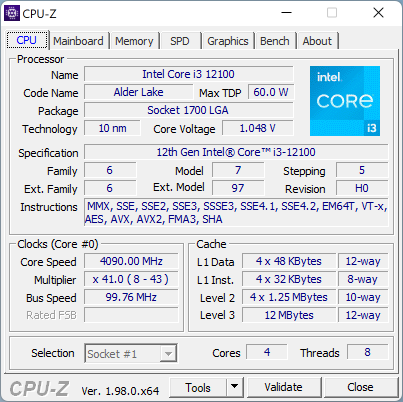 If you just look at the formal specifications of the Core i3-12100 and do not go into details, it will seem like a close analogue of the Core i3-10100 – these processors have the same not only core formulas, but also clock frequencies. And in this sense, the new Core i3 are not like their older brothers: in the more expensive processors of the Alder Lake generation, the number of cores has increased compared to their predecessors. But there are quite understandable reasons for the stagnation in the Core i3 camp: there is no point for Intel to strengthen this series, because AMD has actually left the lower price segment. The introduction of 2020 Core i3 processors with four cores and Hyper-Threading technology was Intel’s answer to the Ryzen 3 3300X, and now there is simply nothing to answer. And that means

However, studying the above table, it is easy to notice another useful feature of the Core i3-12100: in comparison with the previous quad-core, it has twice the L3 cache. And this is good in itself – in some applications, especially gaming, a large cache can cause a noticeable increase in performance. At the same time, the Ryzen 3 3300X has an even larger L3 cache, but it is built on the old Zen 2 microarchitecture, which, in terms of specific performance, was inferior to Cypress Cove, not to mention the more modern Golden Cove microarchitecture.

The Core i3-12100 processors are based on the same stripped-down semiconductor chip used in the lower Core i5 processors – it has six cores and has an area of ​​162 mm 2 . At the same time, two cores are disabled, which, combined with relatively low operating frequencies, allows the Core i3-12100 to remain within the 60-W TDP. Thus, with a full multi-threaded load, this processor is able to operate for an arbitrarily long time at the maximum possible frequency of 4.1 GHz, and with a load on one core, its frequency rises to 4.3 GHz.

This can be confirmed by graphs of CPU power consumption, where we compare the Core i3-12100 with other quad-core core i3-10100 and Ryzen 3 3300X. The measurements were carried out in the game Horizon Zero Dawn and with resource-intensive multi-threaded rendering in Blender. 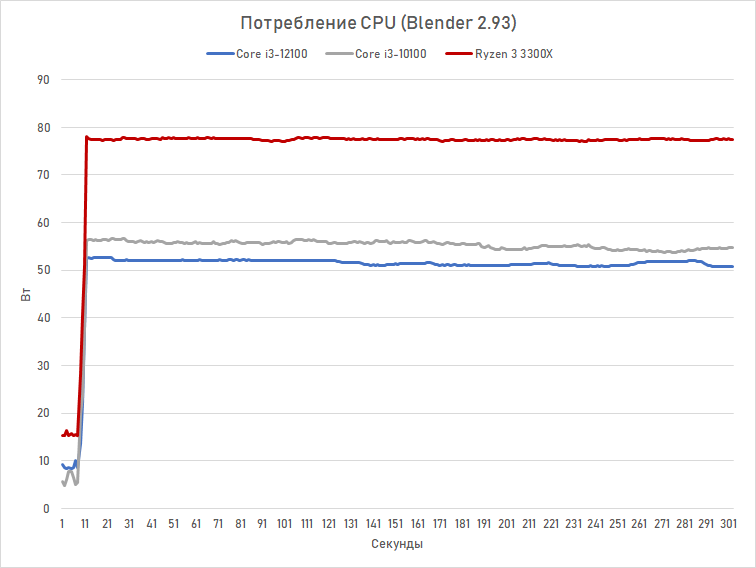 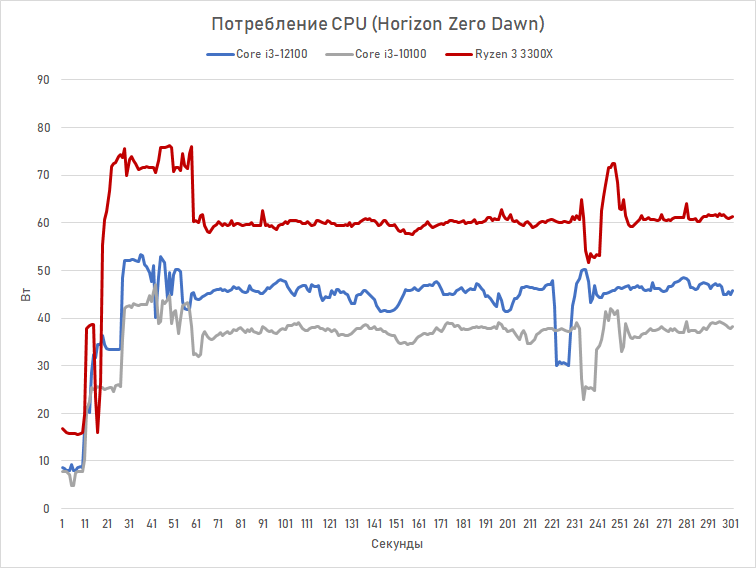 It is easy to see that the maximum power consumption of the Core i3-12100 is only 52 watts. And in average loads (in games), it generally consumes about 45 watts. These are quite small values, and, therefore, both budget motherboards based on the H610 chipset and simple cooling systems are suitable for it. For example, the standard Laminar RM1 cooler from the box is perfectly combined with this processor. 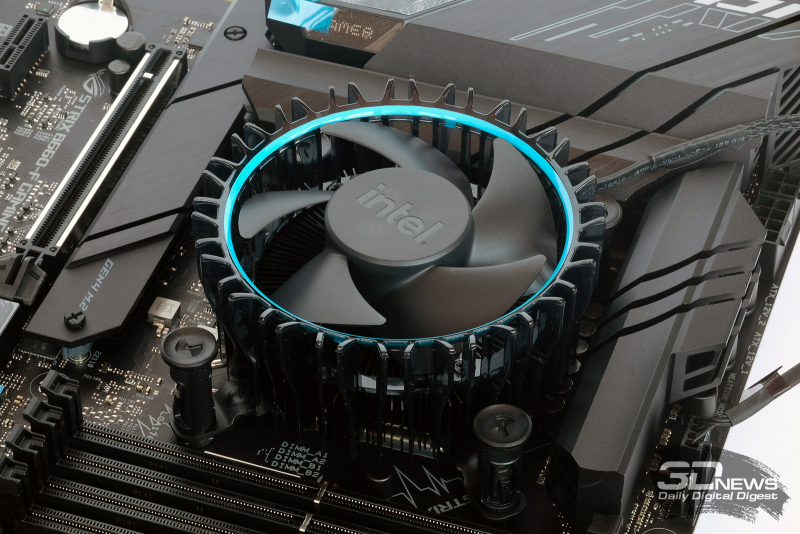 How such a cooler works in conjunction with the Core i3-12100 can be estimated from the processor temperature graph observed when rendering in Blender – in one of the most resource-intensive tasks. 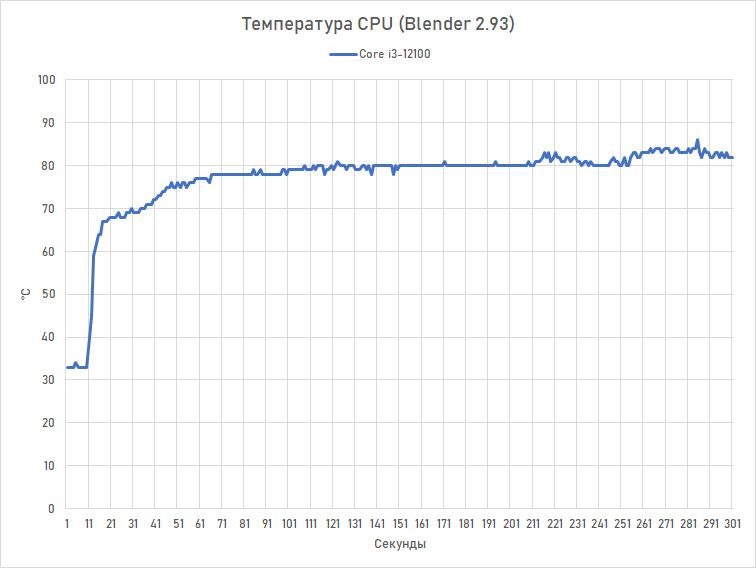 Even a seemingly unassuming cooling system keeps temperatures below the 85-degree mark. Therefore, it is really quite possible to save money on a cooler for the Core i3-12100. The only thing we should not forget is that its mount must be compatible with LGA1700, that is, it must be designed for the arrangement of holes in the board with a square with a side of 78 mm.

However, if you decide to save on the motherboard and choose a model based on the H610 chipset, then such a motherboard will deprive you of the possibility of overclocking RAM – this point must be borne in mind. However, in the case of the Core i3-12100, it is hardly worth worrying about this, since there are restrictions on memory overclocking in the processor itself. It does not allow increasing the VCCSA voltage (voltage on the system agent), which limits the stability of the memory controller in Gear 1 mode. Therefore, faster DDR4 memory modules than DDR4-3200, with some Core i3-12100 instances, may not work at all in synchronous mode on any motherboard, and with them you will have to activate the slow and unprofitable half-frequency mode of the Gear 2 memory controller.

If necessary, a system with a Core i3-12100 can be used without a discrete graphics card – this processor has a UHD Graphics 730 graphics core with 24 actuators. But you need to understand that these graphics are office-level, their 3D performance is not so high and will not allow you to comfortably play modern games even at 720p resolution. However, esports games like League of Legends, Fortnite or Valorant are still quite capable of it.

If there is no need for an integrated graphics core, then the Core i3-12100 has an analogue without this functionality – the Core i3-12100F. The choice of such a modification of the processor will save a lot of money – at the official price it is $25 cheaper.