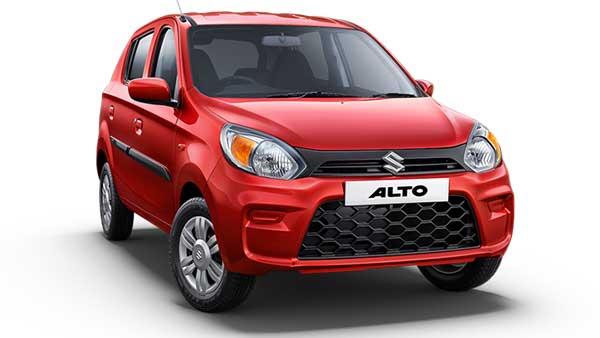 In the pictures that surfaced, this car can be seen in two color options Blue and Red color. The new 2022 Maruti Suzuki Alto is believed to be based on the company’s Heartect platform and could be given an updated version of the current model’s 0.8-litre petrol engine.

The current Maruti Suzuki Alto engine produces 47 Bhp of power and 69 Nm of torque and is mated to a 5-speed manual gearbox. Apart from this, the company will also launch CNG variants of the new 2022 Maruti Suzuki Alto in the market.

At present, not much information has been revealed about the new-generation Maruti Suzuki Alto, but more will be known about this small hatchback in the times to come. It is worth noting that Maruti Suzuki India has recently revised the variant line-up of the current-gen Maruti Alto.

Three variants of Maruti Suzuki Alto have been discontinued, the company has discontinued the standard, LXi and LXi CNG variants of this small car. Now the starting price of Maruti Alto has gone up to Rs 3.39 lakh, while if you want to buy in CNG variant then you will have to pay Rs 5.03 lakh for it.

Now this car is available in a total of 5 variants. Maruti Alto is one of the best selling cars of the country till date and has been ruling the Indian market for the last 20 years. This small car of the company was well-liked by the customers and it was given the last update in the year 2020.