Tata Punch Rival Citroen C3 India Launch Soon: Next year in India, new companies like Tata, Maruti, Mahindra, and Hyundai are also going to launch more than one new car. One such new company is Citroen, which is going to launch its second car Citroen C3 in the Indian market next year and it will compete with Tata’s micro SUV Tata Punch as well as compact SUVs like Nissan Magnite and Renault Kyger. The Citroen C3 was unveiled this year and now its interior images, as well as features, have been revealed.

small but beautiful: upcoming Citroen C3 has been developed on the local Common Modular Platform (CMP) architecture , in the garage to see the luxury cars from all over the world. less than 4 meters. This micro SUV will have a boot space of 315 liters. Talking about its look and style, it gets a wide grille, designer headlamps, angular windshield placement, flat bonnet and flat roof, black cladding all around the body, orange elements on the front bumper and dual tone diamond cut alloy wheels as well as more attractive design. appear. The front grille of the Citroen C3 gets the signature logo as well as chrome treatment, rectangular LED taillamps at the rear along dual-tone bumpers equipped with black cladding. 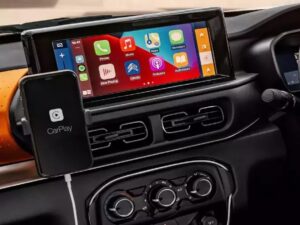 The company will present the Citroen C3 with a dual-tone interior, which will see premium fabric upholstery. Talking about the features, it will get many standard and safety features including a 10-inch touchscreen infotainment system, flat-bottom steering wheels, adjustable seats, automatic AC, cruise control, multiple airbags, reverse parking sensor. The company will present the Citroen C3 in the Indian market with 80 different accessories, which will make people comfortable while riding.
Expected Price: Citroen currently sells the premium SUV Citroen C5 Aircross in India and is now going to introduce an affordable SUV in the form of Citroen C3, which could be priced between Rs 7-12 lakhs. This small SUV will be powered by a 1.2 liter 3 cylinder petrol engine. It can be offered with 5-speed manual and DCT automatic transmission options. This car will have 3 USB ports, which will support fast charging. More features of Citroen will be known in the coming times.
- Advertisement -
Share
Facebook
Twitter
WhatsApp
Telegram
MOBILE
Digit News