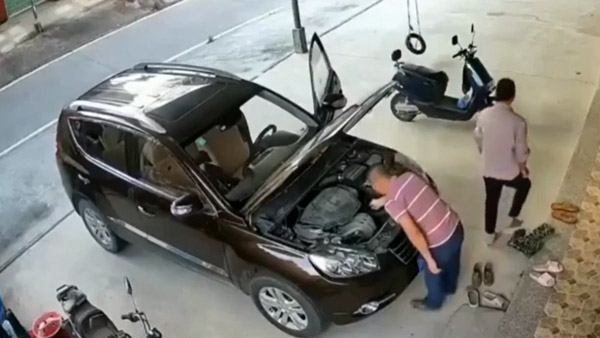 The car hit the mechanic

Actually this video which is going viral on social media is quite heartbreaking. In this, the accident that happened while repairing the car can be clearly seen. This video is a lesson for those people who are careless while doing car repair. It can be seen in the video that a brown car is parked in the garage of the mechanic. He lifts the bonnet of the car and starts fixing it. He goes inside the car several times and comes out.

After this he stands in front of the car and starts fixing the engine. The car then suddenly moves forward and, pushing the mechanic, collides with the front shutter. It is being told in the media reports that the mechanic has suffered a serious head injury in this incident. It can also be seen in the video that the mechanic’s head gets stuck between the bumper and the shutter of the car. However, the information about the condition in which the mechanic is right now has not been confirmed.

This video shared on Twitter has seen more than 7.5 lakh people so far. Twitter users are also giving their feedback on this video. It is being claimed in the news that it is a car with an automatic gearbox which started automatically during repair and went ahead.

At the same time, some people believe that this car was not an automatic but a car with a manual gearbox, which was engaged on the first or second gear. While repairing the car, the mechanic had forgotten to apply the handbrake, due to which the car moved forward on its own.

Keep these things in mind while repairing a car

There are many types of automatic systems in the car, when they fail, they do not respond properly. In such a situation, it is important that you are repairing your car by yourself, so be more careful. When repairing a car, always ensure that the car engine is turned off. Also keep in mind that the gear of the car is not engaged and it should always be in neutral.

Also, don’t forget to use the hand brake whenever you repair or park the car. If you park the car in a place that is not level, you should use the hand brake. This will prevent your car from rolling while parking. Many people engage the gears instead of the hand brake at the time of parking which is not only bad for the gearbox of the car but it also spoils your driving habit.