Car Accident: The bike was dragged out of the car after the accident, the spark kept coming out till 1KM, then got such a lesson 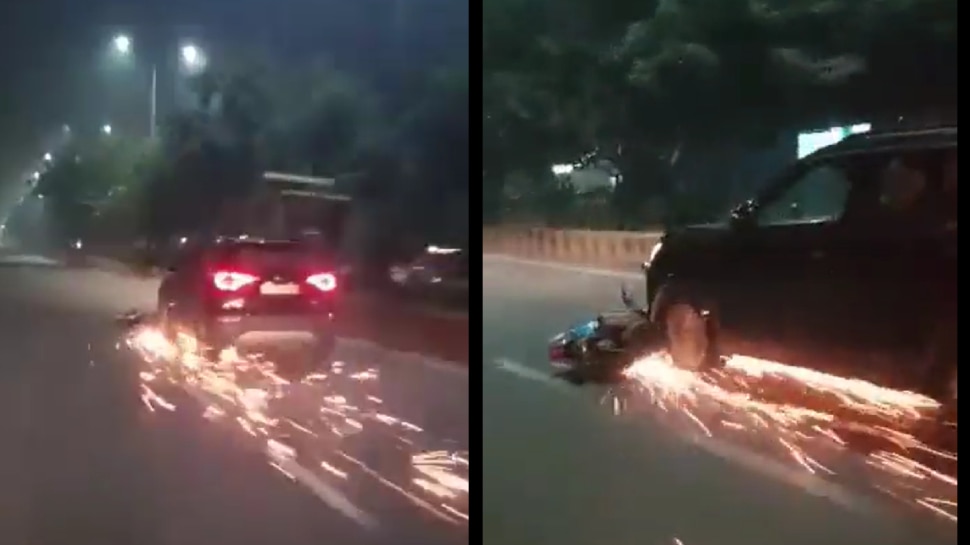 Ghaziabad Accident Video: A strange case of road accident has come to light in Ghaziabad, UP. After hitting a car here, a bike has to travel 1 km. Took it to drag. However, later the man got a lesson and the police arrested him.

Car Dagged Bike in Indirapuram: Accidents often happen while driving on the road. However, it is wise to stop your vehicle immediately and resolve the matter through dialogue. However, many times people do such acts after an accident, which becomes heavy on them. One such case of road accident has come to light in Ghaziabad, UP. After hitting a car here, a bike has to travel 1 km. Took it to drag. However, later the man got a lesson and the police arrested him.

The video of the incident is going viral on social media. The incident took place on Thursday night in Indirapuram area of ​​Ghaziabad. According to the information, a speeding Mahindra XUV car rider hit the bike driver. The life of the bike rider was saved in the collision. However, his bike came in front of the car. In such a situation, the car rider instead of stopping, drove his car away.

The car driver dragged the stuck bike forward for about 1KM. During this, the spark kept coming out continuously. Many people tried to stop him, but he kept running. However, a group of bike riders finally stopped him. Some people recorded this whole matter in their phones, which is now going viral. The name of the accused is being told as Abhishek. The man has been arrested by the police.

Ghaziabad, Deputy SP Swatantra Singh said that the car owner was arrested as he kept on dragging the bike stuck in the car without heeding the words of the bike owner. The car has been impounded and the bike owner is safe.