By analyzing wind noise on Mars, scientists were able to understand what is below the surface of the planet. 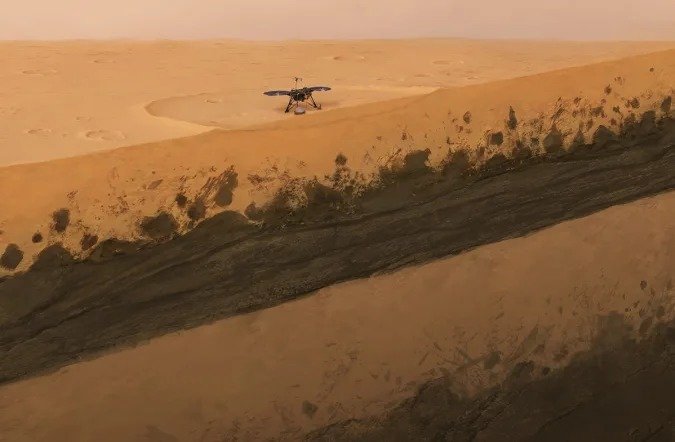 Swiss scientists presented new results of the analysis of data received from the NASA InSight lander. As you know, earlier using a probe managed to measure the size of the core of Marshowever, the apparatus is not capable of directly studying structures below the planet’s surface. In the meantime, it would provide a more complete picture of how the planet was formed. According to a publication in the journal Nature, they have now managed to get the first detailed idea of ​​what lies just below the planet’s surface and trace its history back several billion years. And all this – listening to the Martian winds.

More specifically, they analyzed the background noise (in the absence of earthquakes) collected by the InSight seismometer. On Earth, similar seismic noise is generated by the ocean, human activities and winds, but on Mars, only the third of these factors is at work. The Swiss Seismological Service (SED) has developed methods for analyzing ambient noise data to determine geological structures here on Earth, and it is these methods that SED scientists, together with their colleagues at ETH Zurich, have used to analyze data from InSight.

According to the results of the analysis, the top three meters of the area where InSight sat down is composed of sand, and the next twenty meters is formed by loose volcanic rock, shattered by meteorite impacts. Beneath this sand and rocks lie streams of solidified lava, separated by sediments that formed when the planet was cold and dry. Researchers believe that the uppermost lava flows formed about 1.7 billion years ago, and the deepest – 3.6 billion years ago, during a period of much greater volcanic activity.