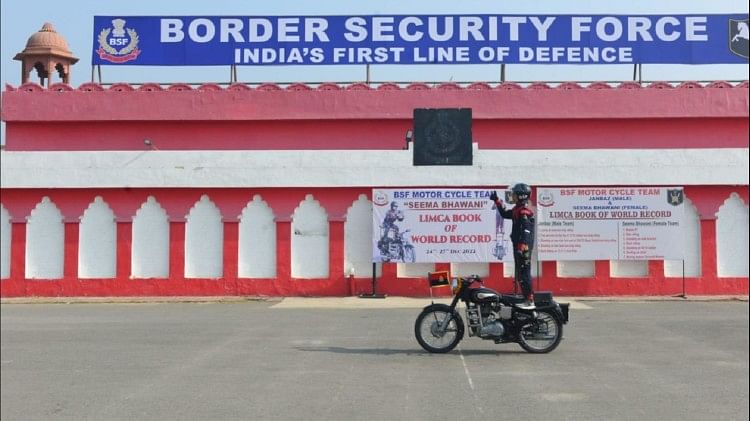 The motorcycle stunt team of the Border Security Force (BSF) has created several records riding Royal Enfield motorcycles. While the daredevil team achieved the record for the longest ride by two people on a ladder of 12 feet 9 inches, a woman inspector did a standing bike ride for over 6 hours traveling over 175 kms, which The longest ride ever in recorded history. The two records came close to another record by BSF where two bikers covered a distance of more than 80 kms in more than two hours without a break. All these achievements got registered in Limca Book of Records.

The first record was made by Inspector Awadhesh Kumar Singh and Captain Sudhakar of the daredevil motorcycle team of BSF. He holds the record for the longest ride by two persons on top of a ladder of 12.9 feet mounted on top of a Royal Enfield 350cc motorcycle. He covered a distance of 174.1 kilometers in 5 hours 26 minutes during the Vijay Diwas celebrations of BSF at 25 Battalion BSF Campus, Chhawla, New Delhi on 16 December.

The second record was achieved by Inspector Vishwajeet Bhatia, a member of the BSF daredevil motorcycle team, who rode a Royal Enfield bike lying down. He set the record for the longest ride lying on the seat of a Royal Enfield without a break for 2 hours 6 minutes, covering a distance of 70.2 kilometers on the same day as the previous record.

The third record was made by Inspector Himanshu Sirohi, captain of BSF women’s motorcycle team Seema Bhavani. He achieved the longest standing position on the side bracket of a Royal Enfield 350cc motorcycle. He covered a distance of 178.6 kms in this position in 6 hours 3 minutes.

The BSF bike stunt team regularly participates in the Republic Day parade on 26 January every year. The brave team was formed in 1990.