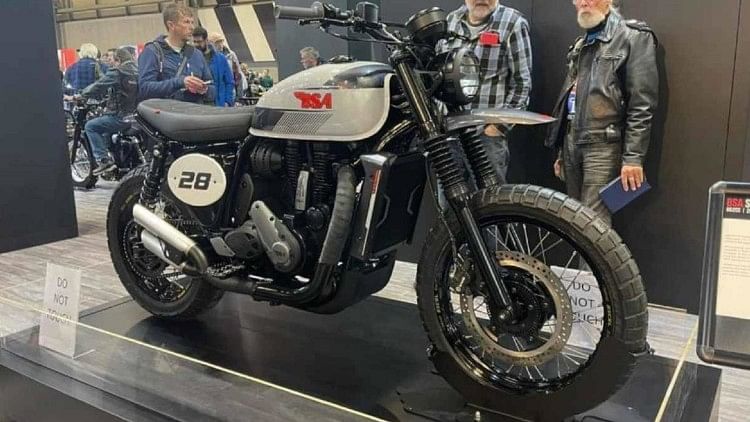 BSA Motorcycle introduced the Gold Star 650cc retro-styled motorcycle in December 2021. Looks like BSA is working on a new 650cc scrambler as a new BSA Scrambler concept bike has been unveiled at the Motorcycle Live show in Birmingham.

Although the company has not yet confirmed whether the production model of the new Scrambler will be ready or not. However, some media reports claim that the BSA Scrambler 650 could be launched sometime in the year 2023.

The pictures from the motorcycle live show reveal that the styling of the concept is rough and tough. It is equipped with wire-spoke wheels, raised front fender, single-seat and headlight grille. BSA is calling this motorcycle a concept. However, most parts of the bike look production ready. The motorcycle gets long travel suspension, knobby tires and a new color with 28 side plates.

The headlight cover, wide handlebar and wire-spoke wheels accentuate the off-road styling of the motorcycle. The BSA Scrambler 650 features a larger front wheel with a single brake disc, a dual-exhaust pipe and dual shock absorbers at the rear.

The concept motorcycle will be powered by the same 652cc, liquid-cooled single-cylinder engine that also powers the Goldstar. This engine generates power of 46 bhp and peak torque of 55 Nm. A 5-speed gearbox has been given with this engine.

The BSA Scrambler 650 could get a twin-pod instrument console with a semi-digital layout. On the left is an analog speedometer and an LCD for the odometer. While the right side of the concept will feature a tachometer and a digital fuel gauge.