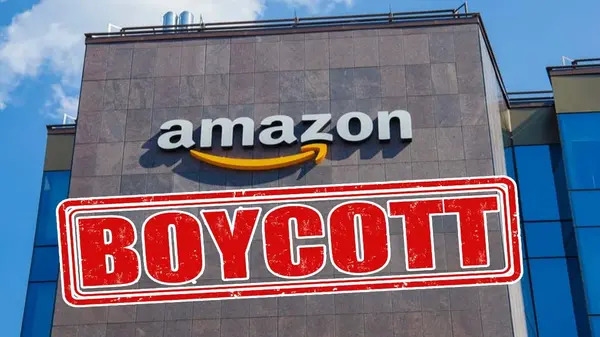 The trend of online shopping has increased from India to all the countries of the world. If we talk about e-commerce websites, then the name of Amazon and Flipkart are taken first.

Recently, a complaint has been filed with the police against the Amazon platform and there has been a lot of ruckus about it. Not only this, hashtags are also trending on social media platforms and Twitter to boycott Amazon. There is a demand to boycott Amazon and we are going to tell you about the reason behind this police complaint.

Let us tell you that Hindu Janajagruti Samiti, Bangalore has filed a complaint against Amazon. He has told the police that strict action should be taken against Amazon. The committee has claimed that Amarjan is selling a dirty and inappropriate (obscene) painting of Radha-Krishna in the ‘Foreign India’ section on its website. This painting was being sold on Amazon at Inkologie Store.

Some time ago, hashtags were trending to boycott films like Lal Singh Chadha, similarly after the filing of this complaint, hashtags to boycott Amazon are trending on Twitter. Twitter Trending). That painting is no longer visible on Amazon, but no statement has been made by Amazon at the moment.

Every day people protest the stories shown in the movies. When a film is based on history and it is told in a wrong way, it is opposed. Similarly, people have also opposed the painting being shown on Amazon. After which Amazon has removed that painting from its website.