Booking of Nissan Magnite Red Edition has started, know what will be special in it 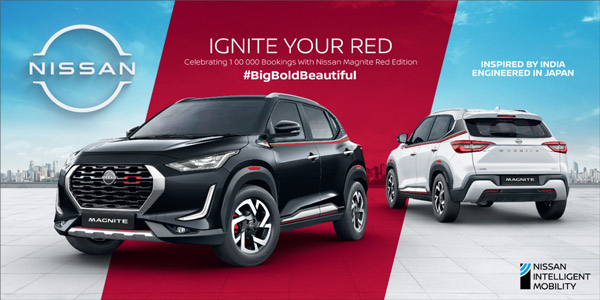 Nissan Magnite is a popular model of the company which is the company’s most successful car till date in the Indian market. With over one lakh bookings, 50,000 units have been delivered so far. On this occasion, the company is going to bring a special Red Edition which is going to be based on the XV variant of Magnite.

The Nissan Magnite Red Edition will be offered in three variants – XV Manual, Turbo XV Manual and Turbo XV CVT. The company is going to bring it with an attractive design. It will get red accents on the front grille, front bumper cladding, wheel arches and body side cladding. At the same time, bold graphics, tail door garnish, LED scuff plate and red edition badge will be given in it.

Talking about its interior, some new features will be given in it, which includes wireless charger and ambient lighting. On the other hand, the XV variant will get 8-inch touchscreen infotainment system with WiFi connectivity, 7-inch TFT instrument cluster, LED DRLs, 16-inch diamond cut alloy wheels, traction control, hill start assist, etc.

Magnite was introduced by the company in December 2020 and it became very popular. The company regularly updates the Magnite to maintain its sales position among the competitors, some time back its new edition was introduced and it was given dual horn, shark fin antenna and PM 2.5 filter.

The Magnite is a sub-4 meter SUV from the company, which competes with the Kia Sonnet, Tata Nexon, Maruti Brezza and other compact SUVs in the Indian market. When the Magnite was launched in India, it was priced at Rs 4.99 lakh (ex-showroom). This price was much lower than any car in this segment, with the customers getting the option of a sub-4 meter SUV in their budget.

The Magnite is one of the safest cars in the country with a 4-star safety rating by Global NCAP. The new Nissan Magnite comes with the most economical maintenance cost at just 30 paise/km (for 50,000 km). The company is giving a warranty of 2 years or 50,000 km on this SUV.

The rivals of the Nissan Magnite have recently been brought with several updates, so Nissan also does not want to be left behind, due to which the company is going to bring the Red Edition. Now it has to be seen how much the price of this special edition will be kept.