Booking of Bajaj Chetak electric scooter started in Delhi and Goa, know how to book 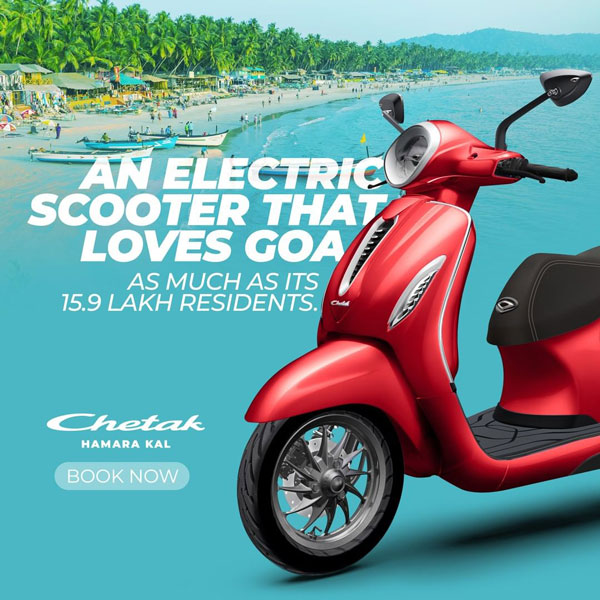 Booking of Bajaj Chetak is currently going on in Andhra Pradesh, Daman and Diu, Gujarat, Karnataka, Kerala, Maharashtra, Tamil Nadu, Telangana apart from Delhi and Goa. It has been made available in a total of four color options and its price has been kept at Rs 149,350 (ex-showroom). The company had stopped its booking for several months due to lack of chip, but now it has been started again.

The Chetak electric scooter was introduced in two variants – Urban and Premium but currently only the premium variant is being booked. The Bajaj Chetak is powered by a 3.8 kWh electric motor with a 3 kWh IP-67 lithium-ion battery, which is non-removable. Bajaj Chetak’s rival electric scooter, TVS i-Cube and Ather 450X also do not have the option of removable battery.

This scooter gives a range of 95 km in Eco mode when fully charged. At the same time, its top speed remains up to 70 km / h. It takes 5 hours to fully charge this electric scooter from a 5 ampere power socket. Talking about its design, the company has given it an iconic retro design. Features like LED derailleur and headlamps, digital instrument console, USB port, alloy wheels and disc brake have been given in it. The company has also given live tracking feature in it.

With the help of this feature, this electric scooter can be connected through a smartphone application and it can also be tracked. Let us tell you that the Bajaj Chetak electric scooter is being manufactured at the company’s plant in Pune. The company is about to set up a new factory to manufacture this and other electric vehicles.

Bajaj Auto is planning to localize manufacturing of its Chetak electric scooter. The company says that due to the disruption in the supply chain due to the Corona epidemic, the supply of parts of electric scooters has been disrupted, due to which the company is unable to manufacture the scooters in stipulated number. However, now that the auto market returns to normal, the company is working at full capacity.

Bajaj has said that it will soon start procuring some of the key components such as motors and batteries for electric scooters from domestic manufacturers. The company has said that increasing localization in manufacturing will bring down the cost and make the scooters more competitive in the market. The Chetak electric scooter made under the new manufacturing policies may cost less than the current model.

The company claims that it will soon launch the new model of Chetak in the market with some updates. According to a report, a 2.884 kWh battery will be installed in the new Chetak scooter. The electric motor in it will generate power of 4.2 kW, while the top speed of the scooter will be 60 km per hour. The Bajaj Chetak is currently one of the most expensive electric scooters in its category.

The production of Bajaj Chetak has now come to normal level, due to which the company is starting its booking in more and more cities. The company will soon have to bring a cheaper version of this electric scooter.