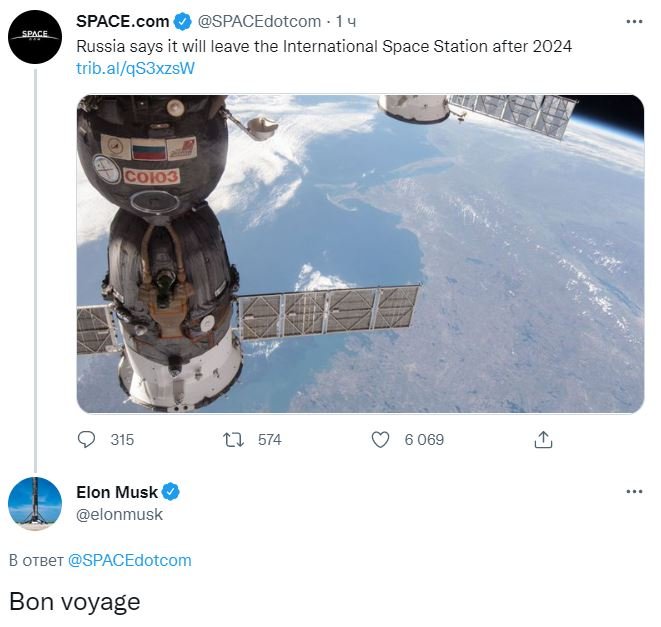 Comments from US representatives appeared on the Web on the message that Russia is going to withdraw from the International Space Station project after 2024. Perhaps the most striking, but the least informative, was left by Elon Musk.

On Twitter, the news that Russia will withdraw from the ISS project, he commented briefly but succinctly: “Bon Voyage“.

NASA also said that they have not yet received official notification from the Russian side. “I think the Russians, like us, are thinking about what the future holds for them, we are planning a transition to commercial stations in 2030 in low earth orbit, they have a similar plan, we are also thinking about this transition, we have not received any official notifications from partners, as for today’s news, we will discuss their future plans”, said NASA ISS Program Director Robin Gateens at the ISS Research Conference, which is taking place in Washington these days.

However, a warning to terminate cooperation must be filed no later than a year, so theoretically (through official channels) it can be sent to NASA at the end of 2023.

Meanwhile, the US National Aeronautics and Space Administration is not going to abandon the ISS project until 2030, as previously reported. This was stated by the head of the American ISS program, Joel Montalbano, speaking at the same conference.

“We still have a whole decade. My plan is to use it at full capacity until 2030” Montalbano said.