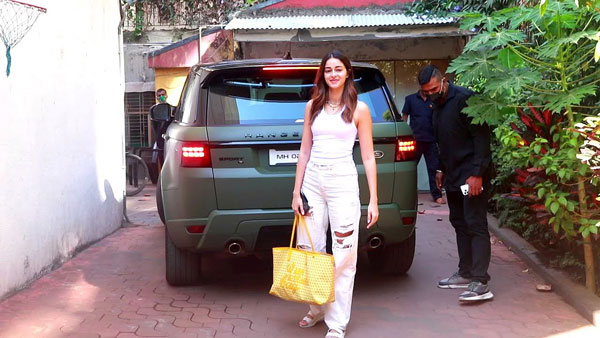 There have been instances in the past too, when top-ranked actors and actresses in India were seen seated in various iterations of the Range Rover, especially the top-spec Range Rover Autobiography. The highlight of Ananya Panday’s Range Rover Sport SE is its distinctive colours.

The Range Rover Sport is wrapped in a special matte wrap in Military Green shade. Even the casting of the lower body, which is usually black, has also been wrapped in this wrap. It definitely looks classy and shows the interest of the person in classy designs.

Apart from the wrap job, the Range Rover Sport in the video shows gloss black highlights, roof-mounted spoiler, name badge and D-pillars for the full width of the strip running across the boot lid. The video shows only the rear profile of the SUV.

However, it would be fair to say that the gloss black highlights have also been used for the front grille, fog lamp surround, roof and other pillars. Also, the smoked effect can also be seen in the tail lamps of the SUV. Few more details about this Range Rover Sport have been revealed in the transport app.

Talking about the engine of Range Rover Sport SE, the 2.0-litre, four-cylinder turbocharged Ingenium petrol engine is used in it. This engine provides maximum power of 300 bhp and maximum torque of 400 Nm.

Standard 8-speed automatic gearbox and four-wheel-drive system are provided with this engine. Its SE variant is one of the most affordable variants in the Range Rover Sport lineup and is priced at Rs 1.03 crore (ex-showroom, India).

However, in most states and union territories, police do not stop vehicles with different colored wraps. To be safe it is better to stick to the stock color while choosing the wrap for the vehicle. Or you can ask local authorities like the RTO about the rule and get it in writing.