BMW i4 electric sedan to debut in India on April 28, will run 394 km on a single charge 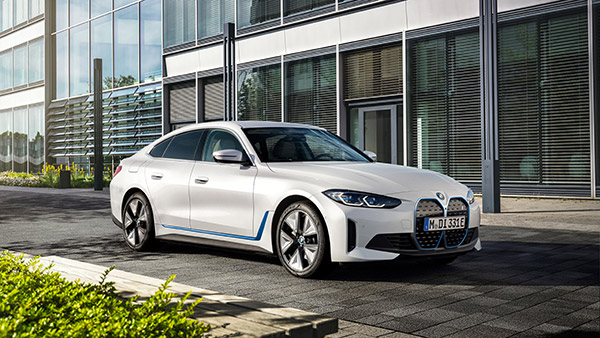 The i4 electric sedan will be the second BMW Electric Vehicle (EV) to be launched in India, and the third EV overall from the BMW Group, after the Mini Electric. It will also be the first electric sedan in the luxury car segment in India.

Globally, the BMW i4 is offered in two variants – the eDrive40 Gran Coupe and the sportier M50 sedan. The company can launch the eDrive40 Gran Coupe in India. Coming to the BMW i4 eDrive40, it comes with an 81.5 kWh battery pack. Its electric motor is capable of producing 330 Bhp of power and 430 Nm of peak torque. BMW claims that the i4 WLTP can offer a range of 483 km on a single charge as per the cycle.

As far as the M50 sedan is concerned, it is a performance based model of the i4 that comes with two electric motors, which are mounted on both its axles. It also gets BMW’s xDrive all-wheel-drive system. It provides power of 529 bhp. Its range is expected to be around 394 km.

The BMW i4 can be charged using a Level 2 wall-box via an 11kW AC charger. The car’s lithium-ion battery can be charged up to 100 percent in 8 hours. It can be charged with the help of 200 kW DC fast charge to run up to 142 kms in just 10 minutes.

The BMW i4 electric sedan is based on the new-gen 4 Series and comes with a similar design. However, due to the electric variant, some new updates can be seen in the design. It gets a large kidney grille, LED headlamps, optional blue accents and the signature coupe roofline. The cabin of the car will have a 12.3-inch information display and a 14.9-inch control screen with frameless bezels. The car’s infotainment system is based on iDrive 8 software and supports over-the-air updates as well.

BMW iDrive 8 is the company’s next generation operating system. The company has used new technology and artificial intelligence in the iDrive 8 operating system. The display unit will house the display of the infotainment system and the digital instrument cluster. Artificial intelligence has been used in the BMW i4, so that the car keeps an eye on the activities happening around it.