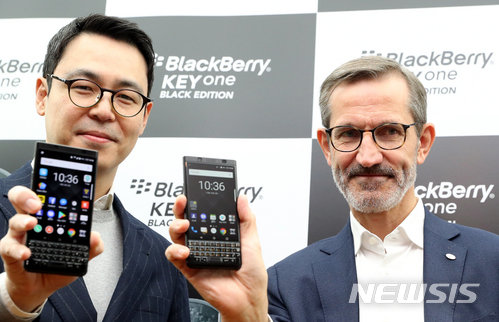 The BlackBerry smartphone, once touted with a QWERTY keyboard and strong security features, will eventually disappear into history. BlackBerry has already announced its withdrawal from the smartphone business, and startups that have obtained a license to use the BlackBerry brand have also officially announced their abandonment of 5G smartphone launches.

According to foreign media on the 22nd, Onward Mobility, a startup that owns the brand license of BlackBerry, recently released a statement through its website officializing the abandonment of 5G smartphone development.

Onward Mobility said, “It is regrettable to inform that Onward Mobility has closed its doors and is no longer developing a smartphone with strong security equipped with a physical keyboard.”

Onward Mobility added, “We sincerely thank the team of experts who have worked tirelessly for this project, as well as the fans and partners who have supported us during this journey.”

Blackberry, one of the earliest smartphone manufacturers, was once popular in North America and Europe with a smartphone equipped with a physical keyboard similar to a computer keyboard. It became famous as a smartphone used by former US President Barack Obama, and its global market share reached 20% between 2009 and 2010.

However, as the trend of the smartphone market has been established as a touch screen method like the iPhone, consumers’ interest in BlackBerry smartphones equipped with a QWERTY keyboard has gradually decreased. Eventually, BlackBerry decided to stop producing smartphones in 2016 and was reborn as a security company. In January, the service for BlackBerry 10 software was stopped, and all smartphone-related patents were sold.

However, as Onward Mobility officially abandoned the launch of 5G phones, Blackberry eventually disappeared into history. Consumers who want a smartphone equipped with a QWERTY keyboard have no choice but to look for other smartphones such as Uniherz’s Titan.