Before Apple, the fan made a foldable iPhone, you will be stunned to see the video A fan in China has surprised everyone by making a foldable iphone. Yes, the fan has managed to convert his iPhone into a foldable smartphone. So let’s take a look at this fan made model… Fan named it iPhone V
The foldable iPhone device made by Fan has been dubbed as iPhone V (not to be confused with iPhone 5).This model has a clamshell foldable display, which is similar to the Samsung Galaxy Flip and Motorola Razr.This fan made foldable iPhone was shown by sharing a video on China’s popular video sharing platform Bilibili.The video shows various parts of other foldable smartphones that also feature a clamshell design, similar to the one seen on the Galaxy Z Flip and Moto Razr.It can be seen in the video that the man first split the internal components of the iPhone into two parts and joined them together. 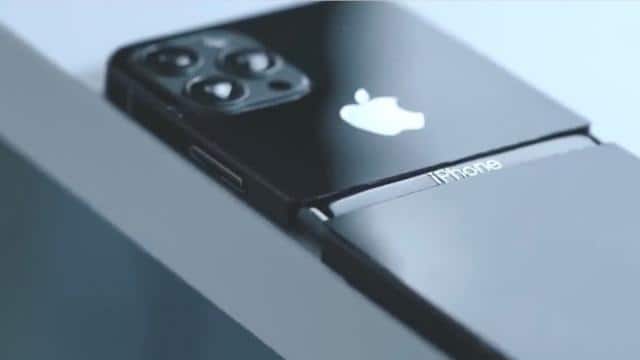 The processor and memory at the bottom of the phone is the
main motherboard with the processor and memory in the lower half, while the upper half houses the battery and camera sensors for the rear and front.It took man about a year to make this foldable iPhone, but it is still just a prototype.Fan used 3 printers to make the shell of the foldable iPhone.The final product shows a fully functioning iPhone, with a foldable screen, with the camera and other basic functions functioning normally. The phone
fan has also made a fake promotional video of the device, which shows that it has 5G connectivity and is powered by the A16 Bionic chipset.There is a 12-megapixel selfie camera on the front, while the display of the device is a Super Retina XDR panel that can be folded.It also offers a Pro Series camera setup and has Ceramic Shield technology.

Watch the first look at the foldable iPhone in the video