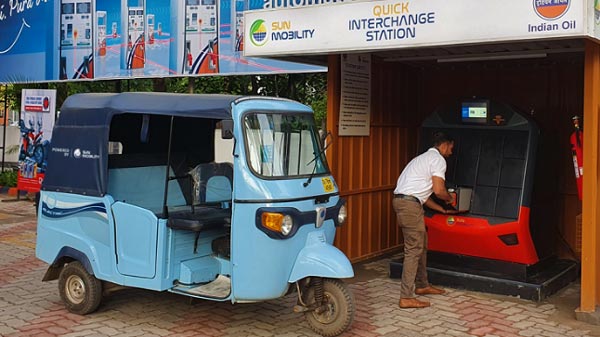 Apart from this, swapping stations will also be made available according to the number of two wheelers or three wheelers in the cities. The draft policy also states that electric scooters with detachable batteries will be allowed to be sold without batteries. This will reduce the acquisition cost of electric vehicles.

Under this policy, private institutions and individuals will also be allowed to set up private or public electric stations. Applicants for setting up of Electric Station will have to comply with certain technical, safety and performance standards as laid down under this policy. NITI Aayog has sought comments from its stakeholders on this draft policy by June 5.

The Central Government had announced the introduction of battery swapping policy in the Budget 2022-2023 presented on February 1. Under this policy, the battery swap network for electric scooters, motorcycles and three wheeler electric vehicles will be expanded across the country. EV owners can be given an incentive of up to 20 percent on the subscription or lease of the battery.

The time taken to swap the battery of an electric scooter is the same as the time taken to fill petrol in a bike. However, petrol vehicles can be refueled at any petrol pump, whereas an EV customer will have to visit a fixed operator for battery swap.

Some electric scooter companies like Bounce in the country are offering batteries to their customers as a subscription. With this, the Bounce Scooter customer can change the battery by visiting any of the swap stations of the company. For this, he has to pay only the swapping charges, which is much cheaper than the cost of charging.

According to a report, more than 12 million tonnes of lithium-ion batteries are likely to be exhausted between 2021 and 2030. Batteries require large quantities of raw materials such as lithium, nickel and cobalt, mining of which has an environmental impact. Bad batteries emit a lot of electronic waste so they need to be recycled properly.

Large quantities of valuable metals are extracted by recycling defective batteries. Recycled batteries are not used again in vehicles, but are used to store excess electricity generated from solar or wind power plants.