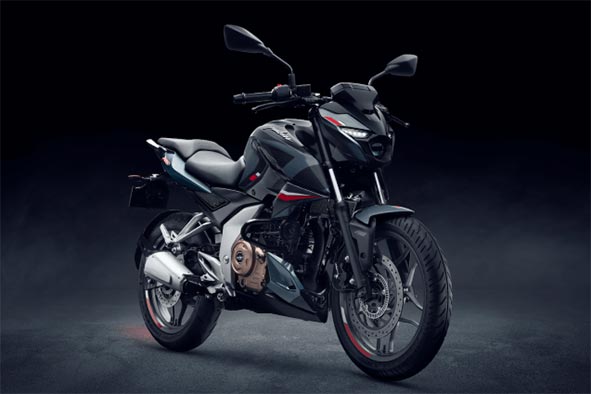 The new Pulsar P150 gets LED projector headlights inspired by the N160 but with a different design. The P150’s headlight gets a different housing and different LED lights.

While the Pulsar N160 gets a headlight without cover, the P150 gets an outer transparent cover to protect the headlight. Overall the bike looks muscular and stylish from the front.

The Pulsar P150 gets 17-inch alloy wheels at the front and rear which get a matte black finish. At the same time, to keep the weight of this bike low, a small underbelly exhaust has been installed in it.

The instrument cluster has been carried over from the N160 and looks exactly like the same. The company has offered the P150 in both single-seat and split-seat configurations, with the split seat variant getting dual discs, while the single seat gets a single disc brake.

The rear of the new P150 gets split LED taillights which are the signature tail lights of the Pulsar N160. New monoshock setup and wide 110/80 section rear tire has been given.

The Pulsar P150’s engine is mated to a 5-speed gearbox that sends power to the rear wheel via a chain drive. In our test ride, we found the P150 engine quite powerful for a 150cc.

The P150’s engine is very tractable thanks to a flat torque curve and is also free from vibrations. The tractable engine means that the bike is easy to use in the city as there is little need to shift gears in traffic.

The soundtrack is bassy for such a small engine, from the single-cylinder powerplant coming out of the underbelly exhaust in the bike. The Pulsar P150 gets telescopic forks at the front and monoshock suspension at the rear. The Pulsar P150 is a well balanced bike when it comes to handling. However, don’t expect much better handling in the corners as the soft suspension setup doesn’t inspire much confidence.

The seats on the Pulsar P150 get ample cushioning and provide a comfortable seating position to the rider, while the rear seat is also quite spacious, which means long journeys on the P150 will provide good comfort.

The Bajaj Pulsar P150 is the fourth new Pulsar based on Bajaj’s new platform for its sporty lineup of motorcycles and we found it to be a simple yet very usable hassle-free motorcycle that will give the customer enough of a sporty and commuter thrill. This could be your first ‘sporty’ commuter motorcycle.