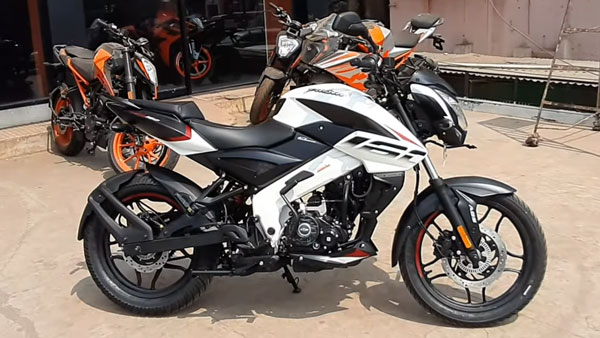 Talking about the design of Pulsar NS160, it is a naked streetfighter bike. It has been given sharp headlight, LED tail light, and turn indicators. Front mudguard, rear mudguard, headlight cowl, visor, and engine guard are given in black tone in the bike. It gets sporty black rear view mirrors which further enhance its visual appeal.

Talking about the features, it gets telescopic forks at the front and monoshock absorber at the rear. This bike is equipped with single channel ABS with dual disc brakes. The attractive ‘NS160’ graphics have been given in the side fenders of the bike. The bike is built on a monocoque chassis and the rear wheel is attached to a box swingarm. Some features like semi-digital instrument cluster, side stand alarm and automatic headlight on have been provided in the bike.

Let us tell you that Pulsar 150 and Pulsar 180 were also launched in the name of ‘Dagger Edge Edition’ in the same paint. Coming to the engine, the Pulsar NS160 is powered by a 160cc single cylinder oil-cooled engine that generates 15.3 Bhp of power and 14.6 Nm of peak torque. The engine is mated to a 5-speed gearbox.

Bajaj Auto has released the sales report of its two wheelers and commercial vehicles. The company has reported total sales (two-wheelers and commercial vehicles) of 3,16,020 units in February 2022, a decline of 16 per cent from 3,75,017 units in the same month a year ago. In the domestic market, Bajaj Auto’s two-wheeler sales declined to 96,523 units in February 2022 from 1,48,934 units in the same month last year.