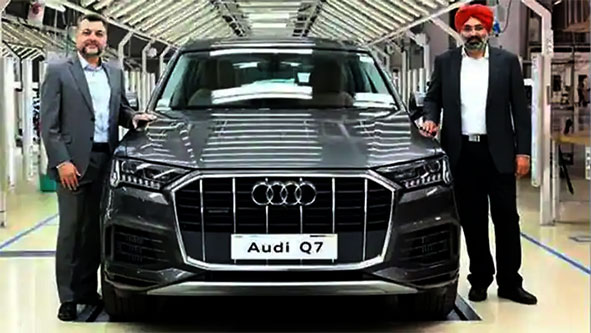 Audi has started booking the facelift model of the Q7 SUV. This car can be booked on the company’s online platform and authorized dealerships by paying a token amount of Rs 5 lakh. Audi’s flagship SUV will be offered in two variants: Premium Plus and Technology. The production of this car has started at the company’s Aurangabad plant.

With the midlife update, the car will get updated exterior elements including updated front and rear bumpers, updated headlights and taillights with dynamic turn indicators and a redesigned grille.

The Q7 facelift will get features like 3-screen setup for instrumentation, infotainment and climate control in the cabin. The Audi Q7 already comes with features like a 10.1-inch touchscreen system, a 360-degree camera and a panoramic sunroof. Apart from this, features like wireless phone charger, foot-operated tailgate, four-zone climate control and powered front seats (driver only) with memory function have been given in this SUV.

For safety, it has been provided with features like eight airbags, lane departure warning, front and rear parking sensors, electronic stability control and park assist.

The facelifted Q7 will be offered with a 3-litre turbo petrol engine (340 PS/500 Nm) along with an 8-speed automatic gearbox option. Audi’s quattro all-wheel drivetrain will also be available in this SUV car as before.

It is estimated that the facelift Q7 can be launched in India by January 2022. Its price can be kept around Rs 80 lakh (ex-showroom). The vehicle will continue to compete with the BMW X5, Mercedes-Benz GLE and the Volvo XC90 .