Ather opens its new showroom in Vijayawada, starts selling 450X and 450 Plus 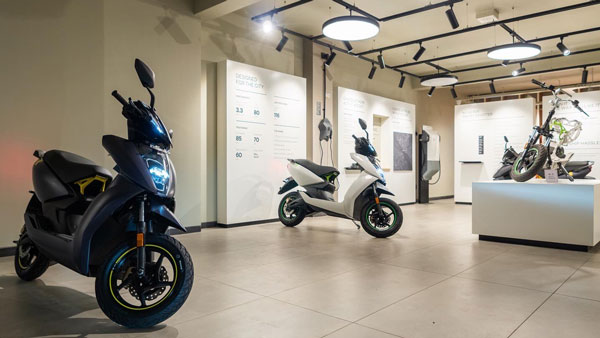 This dealership has been opened at Chandralok Complex, KP Nagar in the city. This is the company’s 31st Experience Center in the country, where the company sells the 450X and 450 Plus. With this new experience center, customers will get an opportunity to know everything about the vehicle easily. The company has also installed a charging point in this dealership, the company is one of the few companies that is working on improving the charging infrastructure.

The company also offers test rides of the scooter at its Ather Space dealership. The customers visiting here can decide to buy the scooter by taking a test ride of the scooter and getting complete information about the scooter. The scooter maker says that it does not want to leave any confusion in the minds of its customers regarding the Ather electric scooter, hence all the questions related to the scooter are answered at the dealership of Ather.

It is worth noting that in the last two years in the wake of the pandemic, there have been many problems for the makers. Ather Energy started deliveries of the Ather 450X much later in the year 2020. Ather Energy ramped up production with the Hosur facility that started operations last year. The company further enhanced the company’s expansion and sales plans with new state and central subsidies and EV policies.

Ather Energy has extended the facility of free charging on its charging grid till June 30, 2022, the company had started this facility in the month of September. Along with this, the facility of free connectivity on the company’s electric scooters has been extended till May 2022, it was started on 15 November. The company’s charging grid is currently available for all companies’ electric vehicles.

Ather Energy had announced to make it free in September when the number of charging grids crossed 200 across the country. The electric vehicle of any company can be charged here, not just limited to the Ather 450 range. In such a situation, if you drive any type of electric vehicle, then this is good news for you, this will give confidence to EVs even among new customers.

Ather Energy is going to set up a new plant in Hosur, Tamil Nadu in India. Ather is set to open a new factory, which will be the company’s second plant, due to the growing demand for its 450X and 450 Plus scooters. After this new plant, the total capacity of the company will be 400,000 units per annum.

Ather continues to expand dealerships and the company is looking to deliver the electric scooter to several new cities this year. Now it has to be seen how many units the company sells this year and how many new cities it knocks on.