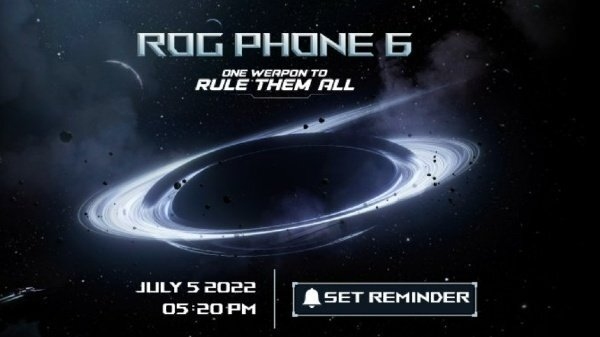 The handset is rumored to feature a 6.78-inch Full HD+ OLED display, which will support a refresh rate of 165Hz and HDR10 content. On the software front, the smartphone will offer Android 12 layered with ROG UI.

DCS claims that the upcoming gaming device will sport 18GB of RAM. The device will be offered with up to 1TB of internal storage.

The Asus ROG Phone 6 has a nice looking design made especially for gamers. The device will be available in two colors – Black and White. The leaked renders suggest that the device will follow the design language of the previous ROG Phone. The lower left side houses the ROG and Tencent Games branding, while the middle one houses the LED display at the back.

The device is expected to sport a 64MP triple camera setup at the back. The primary sensor is expected to be accompanied by a 16MP ultrawide and a 5MP macro sensor. The text on the camera module confirms that the device will sport 8K video recording.

Asus ROG Phone 6 out of the box will boot Android 12. For selfies, the device may pack a 16MP front shooter. Asus is said to pack a 5,850mAh battery with 65W fast charging support. Other features may include an in-display fingerprint scanner, 360-degree CPU cooling, IPX4-rating for water resistance, dual speakers, and Dolby Atmos support.

At present, there is no information available about the sale date of the latest ROG Phone 6 series. However, we expect the vanilla variant to go on sale on Flipkart a month after the launch. We may come to know about the exact date of sale of the device during the launch event.