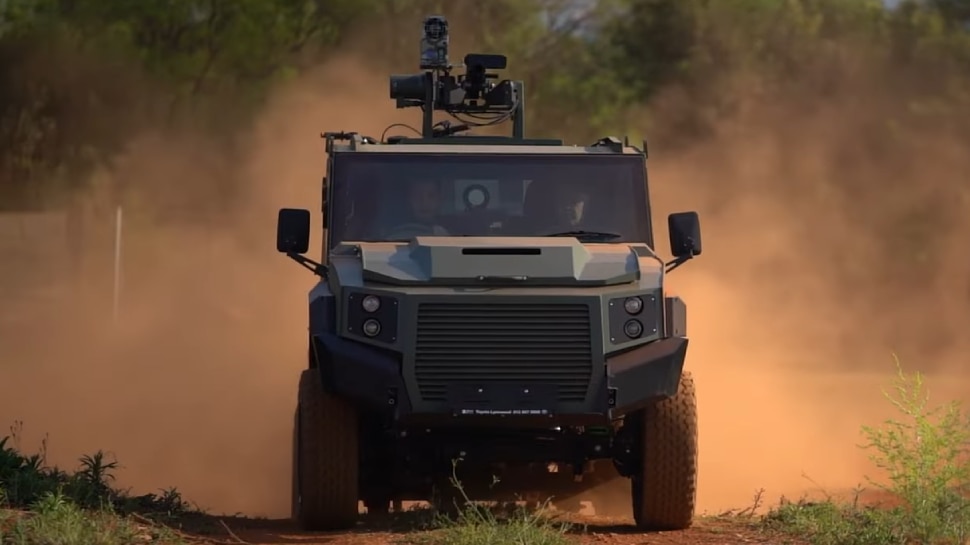 Toyota Land Cruiser: Designed primarily for military and defence. It is based on J79 platform. It has been named MAX 3 six-wheeler. It has 6 wheels. In this, two extra wheels have been fitted in an additional axle.

This Toyota Land Cruiser Armored has 6 wheels and is capable of off-roading. It also gets a flatbed for carrying the motorcycle off-road. Although, you would think that these are the features of any common pickup but it is not so. Drone intercepting radar equipment and grenade launchers are not available in any of your typical pickups but introduced at the Africa Aerospace and Defense Show (AAD2022) in South Africa, this pickup gets both.

It is mainly designed for military and defence. It is based on J79 platform. It has been named MAX 3 six-wheeler. It has 6 wheels. In this, two extra wheels have been fitted in an additional axle. All wheels get disc brakes for better stopping power. It gets a large grille up front and steel armor all around. There are controls in the interior to operate the grenade launcher. It can seat 4 people.

It gets the safety of EN1063 BR6 protection level and it can also be upgraded to BR7 if needed. This level of protection is enough to withstand assault rifles and anti-personnel grenades as well. It has 4.5L turbo diesel V8 engine. The armored Land Cruiser gets a radar at the rear, which intercepts the drone and activates its built-in automatic grenade launcher.