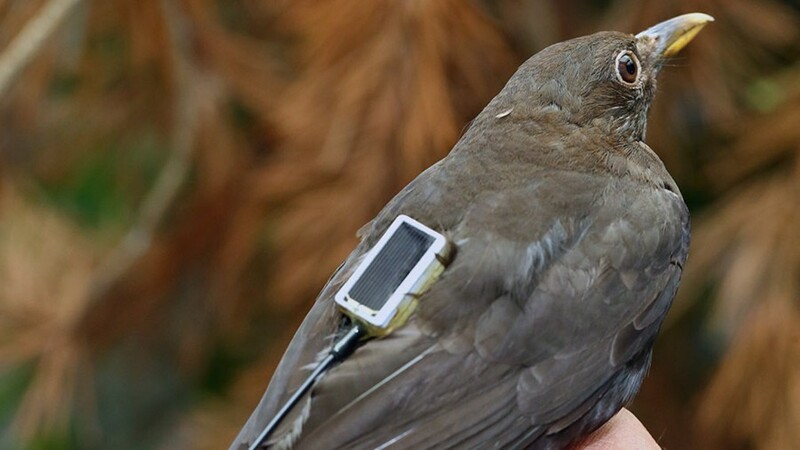 The first operational report of the ‘ International Cooperation in Animal Research Using Space’, also known as ‘ICARUS’ project, which sets the goal of observing the ecology of animals across the earth from space, has been published.

It has been 20 years since the project was launched under the leadership of the Max Planck Institute for Animal Behavior in Germany, and it has been two years since the trial operation began. Icarus is a program that tracks the behavior of animals by connecting the data transceiver of the International Space Station and the transmitter attached to the animal.

According to a report published by the Icarus team in the April issue of ‘Trends in Ecology and Evolution’, an international academic journal, the first Icarus project is the migration route of Turdus merula, a migratory bird in Eurasia, which started in September 2020. It was tracking. The researchers were able to vividly trace the migration of the migratory bird to the Albanian wintering area in the fall of that year.

The transmitter attached to the bird’s back is normally in power saving mode, then turns on automatically whenever the International Space Station at an altitude of 400 km passes through the sky over the bird’s area, and sends various data including the bird’s position to space. Then , the antenna and receiver installed on the Russian module of the space station receive this signal, process it, and send it to Earth. It takes 15 seconds for animals to be within the data transmission range, and it takes 3.5 seconds for radio waves from the transmitter to reach the space station. Data sent from the space station to Earth goes through a control center in Russia and then to a data center in Germany, where it is stored in the online database ‘Movebank’ operated by the Max Planck Institute for Animal Behavior.

“The amount of data received at one time is only 223 bytes, but this is a new era in space-based Earth observation and biological detection,” the research team added. Icarus chose the space station as a data relay station because the space station passes over almost all areas except the poles.

The report also contains the results of data collection and analysis of 15 bird species around the world, including seagulls, pigeons, cuckoos, and bats, collected from March to November 2021. According to the report, during this period, the Canadian Black-tailed Sandpiper flew non-stop from southern Chile to Mexico via Mexico to Texas, and the Oriental cuckoo flew over the sea from Japan to Papua New Guinea. Another cuckoo crossed the Indian Ocean from India to Africa, and the tern moved from the White Sea in northwest Russia to West Africa via Svalbard Islands, Greenland and Iceland.

“This is the first time we were able to identify the latest trends on a global scale,” said Walter Jets, a professor of biology at Yale University, the lead author of the report.

The Icarus system is the Internet of Animals based on Internet of Things technology in that it enables tracking of animals’ locations and behaviors in near real-time across the globe through small, inexpensive sensors. it is a system If the Icarus network is properly constructed, it will allow scientists to expand their view of the animal world to an unprecedented level.

The transmitter attached to the Blackbird by Icarustim weighed 5 grams. To avoid affecting animal behavior, the weight of the transmitter should not exceed 5% of the animal’s body weight. Blackbird weighs about 100g. The Icarustim said the transmitter weighs less now at 4g, and will be downsized to 3g in the near future.

Martin Wikelski, director of the Max Planck Institute for Animal Behavior, who leads the Icarus team, has expressed his hopes of reducing it to 1 g by 2025. If this were realized, it would be possible to track not only small bats, but also insects such as dragonflies, butterflies and grasshoppers.

The transmitter contains a lithium-ion battery, a GPS unit, an accelerometer, a magnetometer, and sensors that measure temperature and humidity and pressure. Also, a 200mm-long data transmission antenna and a 50mm-long GPS antenna are extended outside. The battery is charged by a thin solar cell on the surface of the transmitter.

The Icarus team has produced and distributed about 5,000 transmitters so far. The primary goal is to attach 100,000 transmitters to 500 species of birds, mammals and reptiles. The researchers expect to be able to observe the behavioral patterns of about 40% of birds, more than 50% of mammals, and hundreds of species of crocodiles, turtles and large lizards with the Icarus system in the future.

The research team expects that the expansion of the Icarus network can be used for various purposes in various fields. Animals can act as watchmen of the living earth ecosystem.

Above all, temporal, spatial, and environmental information obtained from thousands of species of animals can provide a more accurate look into biodiversity and ecosystems. It may also provide clues as to why the populations of some animal species, particularly endangered species, are declining. For example, it is estimated that 30% of migratory birds have disappeared in Europe, and the Icarus network can find the cause by tracking their migration routes.

In addition, trace data of individual animal lifespans can be valuable tools for evolution and disease research. Earth observations using animal tracking sensors could provide the information needed to identify potential sources of zoonotic diseases and to determine the potential for long-distance or cross-border transmission. By tracking animals with antibodies, epidemiologists can determine where the hosts of zoonotic diseases such as Ebola and COVID-19 are located.

Although more accurate research is needed, there is room for use in the prevention of natural disasters. In Italy in 2020, Dr. Wikelski published the results of a study in which sensors attached to cattle and sheep showed that these animals exhibit anomalous behavior before earthquakes or volcanic eruptions. If the behavior change related to this can be detected in real time through the Icarus transceiver, it can be of great help in disaster prevention.

The growing number of traceable animals could lead to fun and dramatic animal stories that could spark and draw people’s imaginations.

In this regard, the emergence of the Icarus system can be seen as a sign that a world in which humans, objects, as well as animals are connected through a single network has begun.

Another strength of Icarus is its citizen science program in collaboration with citizen researchers. Icarus researchers are running an animal tracking app (ANIMAL TRACKER) that citizens can participate in. Anyone can install and register the app to upload field observation records and photos of animals with transmitters attached. There are no animals with Icarus transmitters on the Korean Peninsula yet.

In order to complete the animal Internet in name and reality, there is a limit to tracking animals around the world only with the antenna of the space station. It is necessary to establish a tracking system using small or large satellites.

Accordingly, the Icarus team is currently discussing how to use microsatellites in the Icarus system with various space agencies, including the National Aeronautics and Space Administration (NASA). From 2027, it is planned to integrate the ‘Grace 1’ Icarus system, a joint project of NASA, the German Helmholtz Association, the German Space Agency, and the Max Planck Society. Grace 1 is an Earth observation project that tracks the Earth’s gravitational field and water cycle system with two low-orbit satellites.

About 20 universities, research institutes, and technology companies from Germany, Europe, Russia and the United States are participating in Icarus through cooperation and sponsorship.