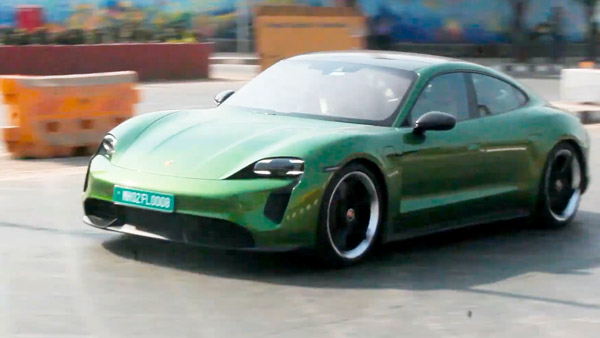 Along with the regular ICE engines, car manufacturers are also selling electric cars and the demand for electric cars is increasing rapidly. All of them include the latest launch Porsche’s first electric car, the Porsche Taycan. Now the company has started the delivery of its new Porsche Taycan electric SUV.

The special thing is that the ground clearance of this electric SUV has been given more than the supercar standards, so that it can easily cross the big speed breakers on the way. Apart from the sleek looking paint scheme, Dinesh Thakkar’s Taycan Turbo S gets stunning dual-tone black and silver alloy wheels.

Talking about the Porsche Taycan Turbo S, this car is the company’s first electric supercar. The 4-door saloon made its global debut in the year 2019 and has since been sold in many car markets across the world. Porsche Taycan has been launched in India in the year 2022.

This car has been launched in a total of four different variants, which include Taycan RWD, Taycan 4S, Taycan Turbo and Taycan Turbo S. Let us tell you that the Turbo S is the top-spec variant of the Porsche Taycan and has also been bought by Dinesh Thakkar.

Contrary to its name, it does not get a turbocharged petrol engine at its rear. Instead, the car gets an all-wheel-drive system, with an electric motor each on both the front and rear axles. Combined, both these motors produce 761 Bhp of power and 1,050 Nm of torque.