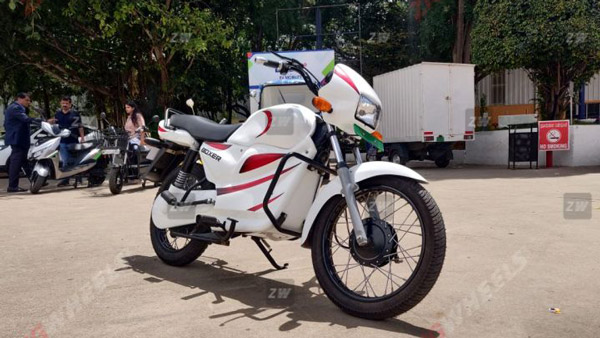 The ADMS Boxer has been launched in India at an ex-showroom price of Rs 1.25 lakh. This bike has three riding modes along with a reverse mode. If the claims of the brand are to be believed, this bike can give a range of 140 kms in Eco mode which is the highest range. It has a lithium-ion battery that powers the hub mounted motor. At present, the company has not shared much information about this bike.

Talking about the design, this bike has a square headlight, tail lamp, turn indicator, seat and mudguard similar to the Hero Splendor. If you look at this bike lightly, it looks completely like the Splendor Plus. A large battery has been installed in the engine compartment of the bike, which is covered with a white cover.

Even the suspension setup and instrument cluster of this bike is very similar to the Splendor. However, being an electric bike, the ADMS Boxer also has some unique features. Like it gets different handlebar design and positioning, chrome-tipped grips and unique switch cube.

Instead of the fuel gauge, the battery indicator has been given in the instrument cluster of the bike and there is also a USB charging port on its handle. The speed meter is similar to the Splendor in the left instrument pod but the graphics inside are different. The company has not given a digital instrument cluster or display in the bike.

The ADMS Boxer electric bike comes with a fully closed fairing, which shows that the bike’s battery is non-removable. The charging socket has been given in place of the fuel cap in the bike. At present, the company has not shared the information about the power, torque, features and warranty of the battery installed in the bike.

The ADMS Boxer can be the perfect bike for those who are looking for an affordable commuter electric bike for everyday use. Talking about the fit-finish and quality of this bike, it is average. According to us, the quality of the bike could have been improved at this price point.