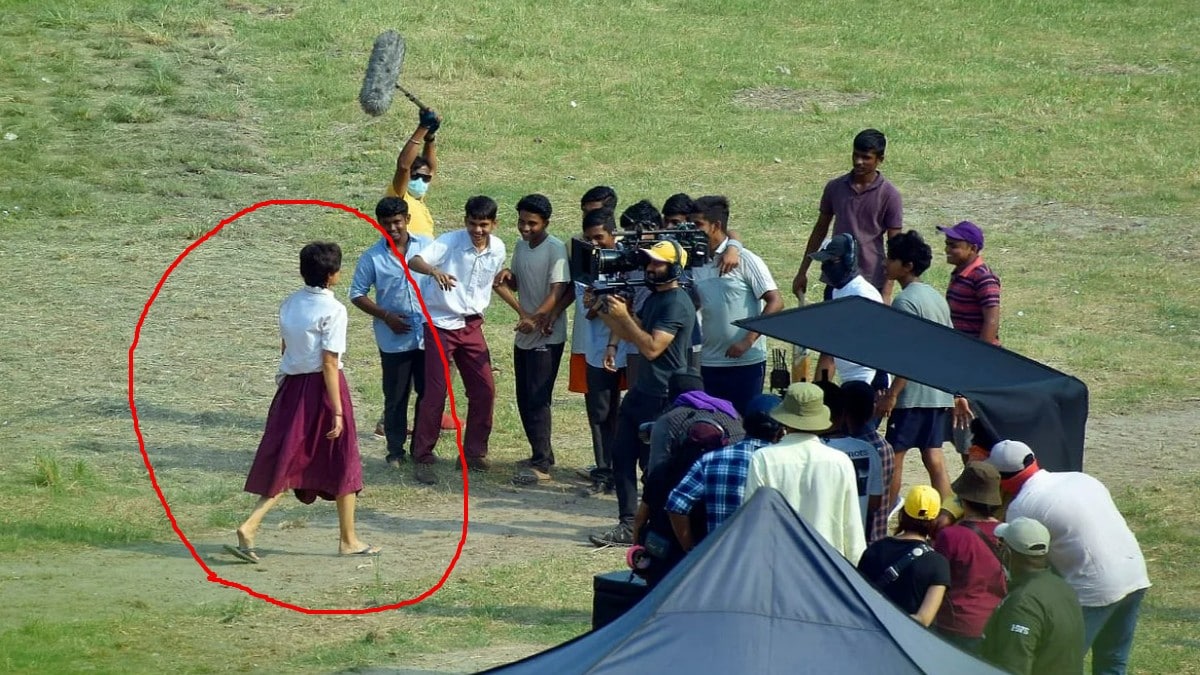 Actress Anushka Sharma will soon be seen in the film ‘Chakda Express’. The teaser of the film was released in January. Chakda Express is a film based on the life of Jhulan Goswami, a famous Indian female cricketer. This film, which is being made on the biopic of Jhulan Goswami, is currently in the shooting phase. Due to this, Anushka’s look has also been leaked from this film. Some pictures of Anushka in Jhulan Goswami’s look have been leaked on the internet, in which Anushka is finding it difficult to recognize.

Pictures of Anushka Sharma shooting for the film Chakda Express have gone viral on social media.

You will be surprised to see the pictures. You will say is this really Anushka Sharma! It can be seen in the pictures that Anushka is wearing a white shirt and maroon skirt. She has slippers on her feet and she is shooting in some playground. Seeing this look of her, it seems as if she is a school going girl.

The most surprising thing in these pictures is her hairstyle. Anushka has done a short haircut in it, due to which her look seems to match Jhulan exactly. It is being said that the shooting of the film Chakda Express is going on in West Bengal. Since Jhulan Goswami also hails from West Bengal, the film is being shot in West Bengal to make it more realistic.

Story of the movie Chakda Express

The film Chakda Express depicts the early difficult phase of Jhulan Goswami’s life. Despite all the difficulties, Jhulan never gave up in life. From the very beginning, Jhulan, fond of sports, used to play football in childhood. Then he saw some people playing cricket in the Eden Gardens and made that his dream. Chakda Express is the story of how he fulfilled his dream of cricket. Since the film is related to the sports world, there will be tremendous energy in the character of Anushka Sharma as Jhulan. This biopic of Jhulan Goswami is being directed by Proshit Roy.

Who is Jhulan Goswami?

Jhulan Goswami is a fast bowler of the Indian women’s cricket team. Jhulan was also the captain of the team till 2011.

Jhulan was born on 25 November 1983 in Nadia district of West Bengal. His father’s name is Nishit Goswami who works in Indian Airlines. His mother’s name is Jharna Goswami. Jhulan comes from a middle class family, due to which the initial phase of her life was very difficult. Jhulan started playing cricket at the age of 15.

There was no cricket club near Jhulan’s house and he had to go to Kolkata daily to play. In 2002, Jhulan got the chance to play her first ODI against England, when she was only 19 years old. During 2006–07, she led the Indian women’s team to victory in the Test series that was played in Australia. She was the captain of the team till 2011.

Jhulan Goswami was named ICC Women’s Cricketer of the Year in 2007. She was the captain of the team from 2008 to 2011. Meanwhile, in 2010, Jhaloon was given the Arjuna Award. He received the Padma Shri in 2012. Since then, Jhulan is known as the daughters of India who have brought laurels to the country across the world.