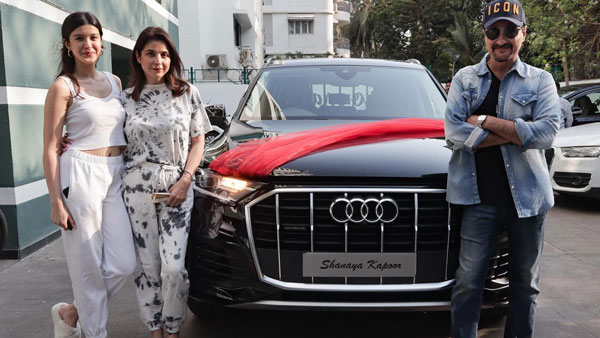 Even before her debut film, Shanaya Kapoor has bought her first car and it looks very attractive in black. Audi Q7 is available in India with a price range of Rs 79.99 Lakh – Rs 88.33 Lakh. Which variant of this car Shanaya Kapoor has opted for is not known, now she can be seen riding a new car in the coming days.

The company is using the 2,995cc V6 twin-turbo petrol engine in the Audi Q7. This engine is capable of producing a maximum power of 335 Bhp and a maximum torque of 500 Nm. It also has a 48-volt mild hybrid system. The car can accelerate to a top speed of 250 km/h and can accelerate from 0-100 km/h in just 5.9 seconds.

Apart from this, some other features including cabin lighting, 12-way power-adjustable front seats, all-weather floor mat have also been provided. The interior features that have been added to the new model include rear side airbags as standard. Apart from this, it also gets heated, power-folding wing mirrors with memory function, direct tyre-pressure monitor, ambient lighting as standard.

The 7-seater model gets electric folding in the third row along with 4 zone air conditioning, keyless entry, electric boot lid, 8 airbags, cruise control, park assist, lane departure warning, 360 degree Camera is provided. It can be integrated with the My Audi Connect app, as well as the virtual reality, augmented reality and product visualizer experiences made available in the Q7.