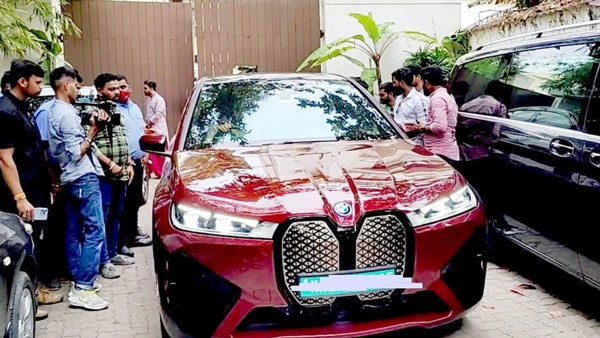 This is said to be his second electric car after the Tesla Model X. He has bought a new BMW electric SUV in maroon color. On his way to Arpita’s house, Riteish was seen driving this car while Genelia was seen sitting on the front seat.

Ritesh’s garage already contains many luxury cars. These include a Land Rover Range Rover Vogue worth around Rs 2 crore, Bentley Flying Spur worth Rs 3.5 crore, Mercedes-Benz S-Class worth Rs 1.3 crore, BMW 7-Series worth Rs 1.4 crore as well as the Tesla Model X which is worth Rs. The price is $114,990 (approx Rs 95 lakh) and is said to be in California.

Talking about the BMW IX, this electric SUV was launched in India at a price of Rs 1.16 crore. It is being sold in India through the Completely Built Unit (CBU) route. It competes with luxury electric cars like Mercedes-Benz EQC and Audi e-tron.

The BMW IX is the fifth generation all-electric SUV from the brand to offer an all-wheel-drive (AWD) drivetrain. Two electric motors have been used on each of its axles. In India it has been launched in a variant xDrive 40. A battery pack of 76.6 kWh has been used in this.

This electric SUV is capable of generating 322 bhp of power and 630 Nm of peak torque. BMW claims that the iX SUV can be driven up to 425 km on a single charge. Globally, BMW also offers a top-end iX xDrive50 trim that offers a combined output of 503 bhp. However, BMW has no plans to bring it to India.

Two electric motors have been provided in the front and rear axles of BMW IX. It is capable of accelerating from 0-100 kmph in just 6.1 seconds. To make the use of the car easier, the company will also provide a home charger kit with the car. This will be an 11 kW AC charger that will charge the car battery to 100 percent in about 7 hours and the car will be charged to run for 100 kilometers in 2.5 hours.