Actor Dulquer Salmaan showed his car collection in the video, cars ranging from BMW to Mercedes are included 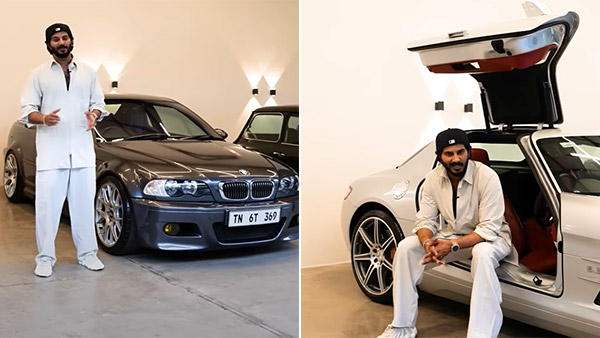 Actor Dulquer Salmaan is Mammootty’s son and both father and son are very fond of cars. Both have one of the biggest collections for any actor. Dulquer Salmaan has shared his video on social media to introduce his cars to everyone. He told that BMW M3 E46 is the most favorite and it is very special. He says that the design of the E46 is very simple but muscular.

Dulquer Salmaan further told that he is very protective about this car and is afraid of getting a small scratch in this car. He told that this car is not in stock and he has done many modifications in it. The stock wheels have been replaced with BBS aftermarket alloy wheels which fits in well with the overall look of the car. The suspension setup and exhaust system have also been modified.

This car is liked by the car lovers all over the world and Dulkar also drives this car a lot. Let us tell you that the BMW M3 E46 was introduced in 2000. It was made available in coupe and convertible body styles. Salman has a coupe model. The car is powered by a 3.2-litre petrol engine that produces 343 Bhp of power and 365 Nm of torque. It is mated to a 6-speed manual gearbox and sends power to the rear wheels.

After that he talks about his Mercedes Benz SLS AMG. Dulquer said that he never even dreamed that he would ever be able to own this car. At that time I thought it was a future classic and time has proved this to be true. No matter what generation having this car is a big deal. Can’t believe it has been 8 years now.

Talking about Porsche in this, it is the Panamera Turbo sports sedan, which costs around Rs 2 crore. This car is liked by all the car lovers. The car accelerates from 0 to 100 km/h in just 3.8 seconds. On the other hand, talking about X6M, its price is also around Rs 2.13 crore and it is known for its fast speed.

Dulquer Salmaan constantly expresses his passion for his cars, but this is the first time that he has shown his cars from the front. He is a fan of classic and sports cars and has one of the best car collections in the country.