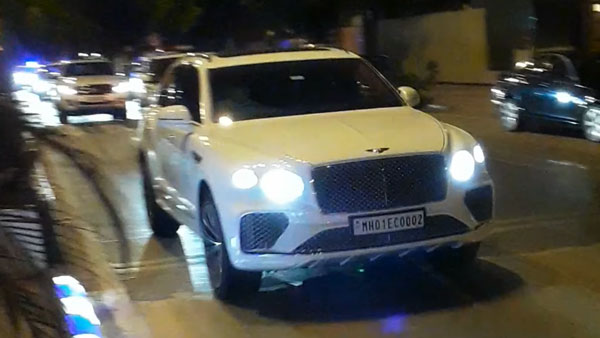 Mukesh Ambani’s new Bentley Bentayga can be seen in a video that has surfaced on the social media platform. White color seems to be the new favorite color of the luxury SUVs of the family. Let us tell you that this is the third Bentley Bentayga of the Ambani family.

The car is finished in white color just like their current Rolls Royce Cullinan. This is the 2021 Bentley Bentayga, which was introduced by the British carmaker in the year 2020. The Ambani family already owns a Racing Green and a Brown Bentley Bentayga.

One of them is powered by a W12 engine and the other gets a V8 engine. Bentley dropped the V8 diesel last year while keeping the petrol W12 and petrol V8. Though in India, Bentley officially offers only the V8 variant.

A similar or similar vehicle was spotted last year at the Ambani family’s residence Antilia. However, at that time there was no registration number on the top of the car. Looks like the family has finally started using the new Bentley Bentayga, which had long been parked in the garage.

The price of Bentayga V8 petrol variant is Rs 4.10 crore (ex-showroom). Ambani was one of the first to receive the delivery of the Bentley Bentayga in India. Finished in a beautiful Racing Green shade, this is the only Bentley in the country to own a Breitling Mulliner Tourbillon watch which is worth more than Rs.1 Crore.

This is the top-end, high-performance version of the Bentayga, which comes with a 6.0-litre W12 petrol engine. It generates maximum power of 600 Bhp and maximum torque of 900 Nm. The Ambani family does not use this car much, although Akash Ambani has been seen driving the car on several occasions.

Soon after the delivery of their first Bentayga, the family took delivery of their second Bentayga. It is the cheaper of the two but still costs several crores of rupees. It is mostly used by the younger son – Anant Ambani and has a psychedelic rap.