A car owner’s challan was cut for not wearing a helmet properly, the strange illusion of the traffic police 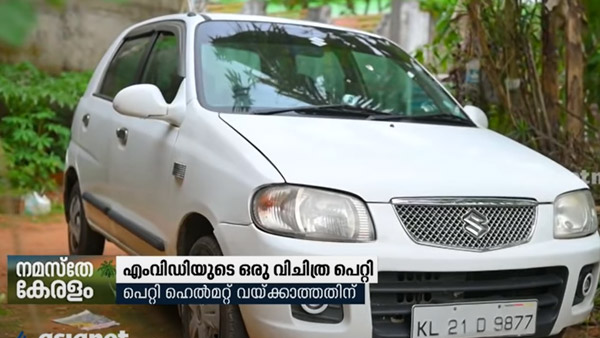 However, all this is not always perfect and sometimes digitization becomes unwise. Recently, a fresh case has come to light, where the Kerala Traffic Police has issued a challan to a car driver for not wearing a helmet properly.

The incident is in reference to a challan, originally issued for two men traveling on a motorcycle, with the person sitting behind not wearing a helmet. But the challan issued contained the registration number of a Maruti Suzuki Alto owned by a person named Ajith A.

The vehicle class is mentioned in the challan as ‘motor car’, which should have been a motorcycle or a two-wheeler. The challan mentions the reason as ‘driving or causing or permitting to drive a motorcycle by wearing a protective headgear, which is not fastened securely to the head of the wearer (helmet) (chin strap).’

This misunderstanding has only troubled Ajith A in an unfair situation wherein he now has to approach the Kerala Traffic Police officials to rectify the mistake. However, Ajith A has told the media that he will file an official complaint with the Motor Vehicles Department to look into the matter.

In response to this, a Kerala Traffic Police official said that the glitch could be the result of a typographical error, when the registration number was being entered into the system for generating challans.