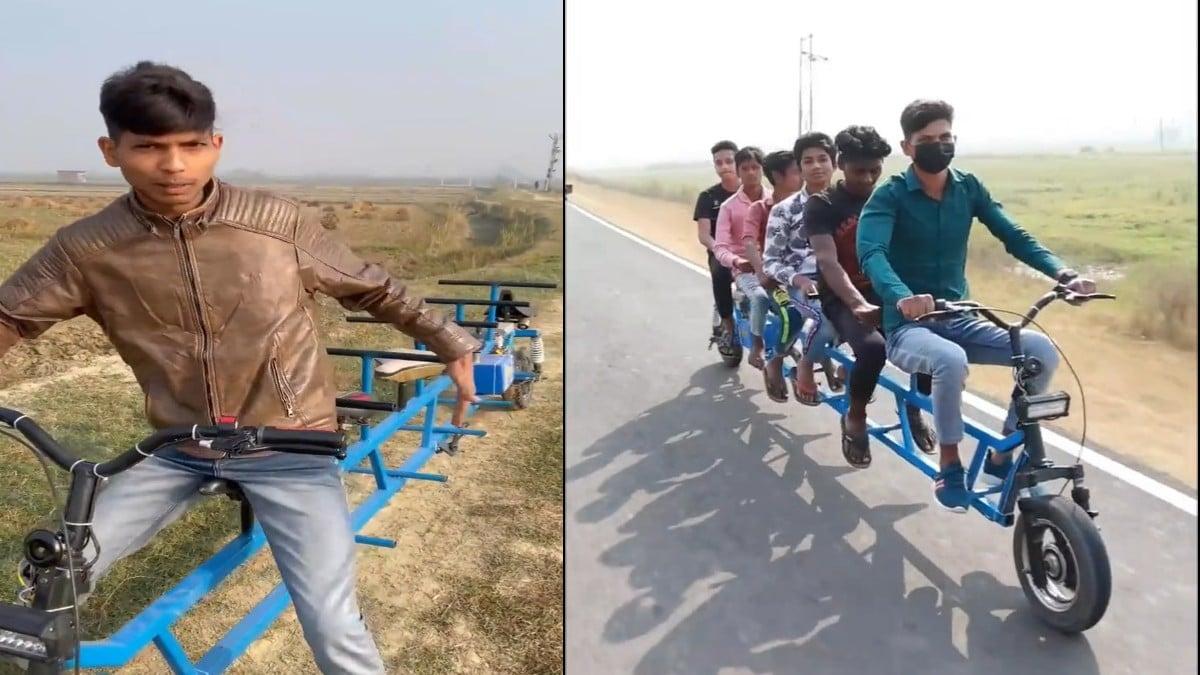 Anand Mahindra is known to be a big fan of innovation and this trait of his can be seen in his social media posts as well. Now Anand Mahindra has shared another similar post on his social media handle, seeing which you will also say wow! What a joke! Actually Indian businessman Anand Mahindra has shared a video in his Twitter post. An electric cycle is visible in this video, which is not a common cycle. 6 people can sit and ride on this bicycle and it can easily carry the weight of so many people even while running on electricity. Being a 6 seater is a big deal in itself for an electric bicycle. You are going to be more surprised to hear its cost and on-road running expenses.

on Twitter Anand Mahindra Like other posts, this post is also becoming quite viral. In this, 6 people are seen sitting on the electric cycle. It has the driver’s seat at the front and 5 more people behind it. In the video, a boy is seen driving this electric cycle and telling that he has prepared a 6 seater e-cycle. The maker says that once charged it can run up to 150 kilometers. It also gets LED lights at the front. You should also see this desi jugaad which seems to be very useful-

With just small design inputs, (cylindrical sections for the chassis @BosePratap ?) this device could find global application. As a tour ‘bus’ in crowded European tourist centres? I’m always impressed by rural transport innovations, where necessity is the mother of invention. pic.twitter.com/yoibxXa8mx

The boy who made the cycle says that it has been made at a cost of Rs 10-12 thousand only. Not only this, it gets fully charged in an expenditure of Rs 8-10. This means that it can run for 150 kilometers at such a low cost. This is really surprising. Anand Mahindra has also tagged Mahindra & Mahindra’s Chief Design Officer Pratap Bose in the video. He has written about it that it can be a good alternative to the crowded tourist centers of Europe. He said that he is always impressed by such innovations coming from rural areas.

So far 50 thousand people have liked this tweet of Anand Mahindra. Apart from this, it has been retweeted more than 6 thousand times. On seeing this, you can also guess that this electric bicycle has a pipe of 8 to 10 feet length, which has been given the form of its frame. The handle has also been given to keep the hand on the passenger seat. Users have also commented fiercely on this. People are praising the boy who made e-bike a lot. Also, some users have raised the question that when this boy can make an e-cycle that runs for 150 kilometers in 10-12 thousand, then why the cost of electric vehicles in India is so high?