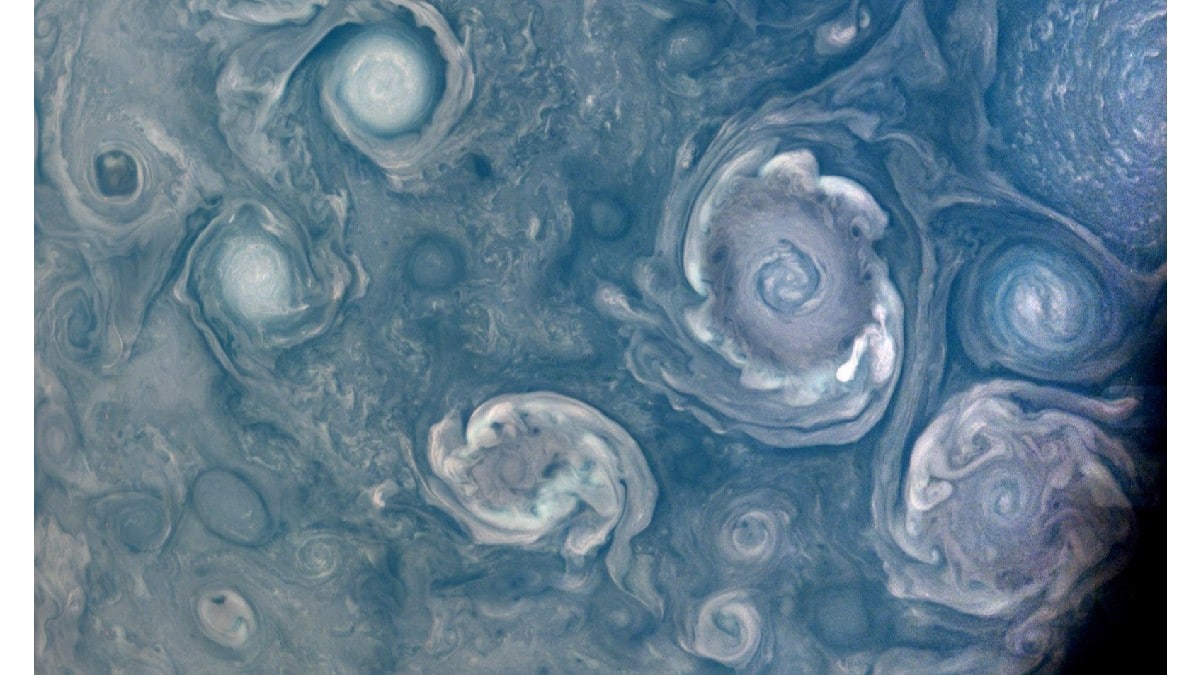 The Juno spacecraft keeps a close eye on Jupiter, the largest planet in our solar system. It was launched in the year 2011 and is operated by NASA’s Jet Propulsion Laboratory. This spacecraft reached the orbit of Mars in 2016 and has been continuously monitoring this planet since then. During its recent flyby, Juno has detected a major development in the surface of Jupiter. The spacecraft captured massive storms near the planet’s north pole during its 43rd close encounter with the planet Jupiter.

Using its JunoCam, the spacecraft captured a vortex-like storm-like spiral wind pattern. These storms appear to be much larger than the storms on Earth. according to reports NASA has said that these storms on Jupiter can be up to 50 kilometers high and within a radius of 100 kilometers. Scientists are trying to understand how these storms occur on the planet Jupiter.

NASA has also asked citizen scientists to come forward to categorize storms and other atmospheric phenomena seen in these images taken from JunoCam. The US space agency has said that no training or software is needed to test such events and images. Citizen scientists can help NASA by collating images with the help of their laptops or mobile phones.

Finding out how they form is important for understanding Jupiter’s atmosphere as well as fluid dynamics and cloud chemistry, NASA says. Scientists are interested in understanding the shape and colors of these storms. Scientists are puzzled by cyclones that rotate counter-clockwise in the Northern Hemisphere and clockwise in the Southern Hemisphere, taking on different shapes and colors.

As interesting as the planet Jupiter is for scientists, its moon Europa is equally important. Europa is slightly smaller than Earth’s moon. Scientists believe that an ocean is hidden under its frozen surface. The evidence so far suggests that this celestial body may be hot, salty and rich in life-supporting elements. It is already known that Europa produces oxygen, although the problem is that the thick ice sheet on its surface prevents oxygen from reaching Europa’s sea.