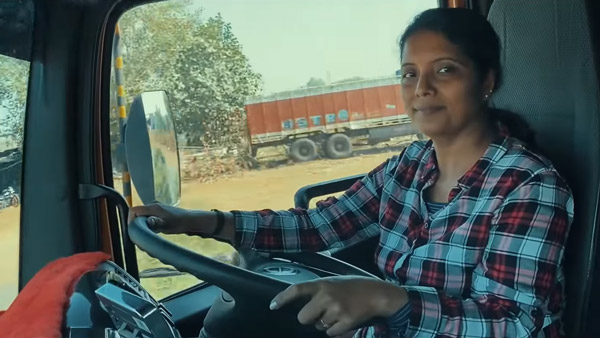 This woman has driven a cargo lorry from Kerala to Kashmir. 40-year-old Jelaja Ratheesh from Kerala is the woman who took the cargo lorry to her dream destination, Kashmir. His video has been shared on social media platforms.

The video begins with Jelaja Ratheesh’s house in Kottayam. Shown is he traveled to Ernakulam in his Ford Endeavor. After this he started driving lorries from Perumbavoor in Ernakulam district. She had to deliver plywood to Pune and then from Pune she took a load of onions to Kashmir.

Jelaja was very excited about the trip as she was going to see places she had only seen in videos and pictures so far. He started his journey from Kerala and traveled to Karnataka, Maharashtra, Madhya Pradesh, Rajasthan, Haryana and Punjab.

Jelaja can be heard saying in the video that people were surprised to see a woman driver on the steering wheel of a cargo truck. Jelaja says that he always had a passion for driving, but the conditions were not favorable for him.

Jelaja learned driving only after marriage. She said that “I have been to Mumbai twice by lorry with my husband. As soon as we got the order for Pune, we also inquired about the load from there to Kashmir. The journey was not expensive, as we carried the load. We were staying and sleeping inside the vehicle. Sometimes we used to cook food in the lorry.”

Jelaja was accompanied by her husband Ratheesh and relative Aneesh in the lorry. Jelaja explained that the journey was not exhausting, as they also had a bed inside the cabin, unlike the cars. She said that her visit to Gulmarg was one of the most memorable moments as she could not believe that she had reached Kashmir.

The only problem she faced while passing through different states was dirty public toilets. Jelaja, her husband Ratheesh and their relative Aneesh started their journey in a BharatBenz lorry with loads of plywood from Haryana and drove it to Bangalore, Dropped in Karnataka.

He then received a load of sugar from Mysore, Karnataka and unloaded it in Kerala, after which his journey was complete. Jelja said that every time someone saw them behind the steering wheel, they were surprised, because they weren’t expecting it.