4 lakh units of Tata Tiago completed, know when this car was first launched in India 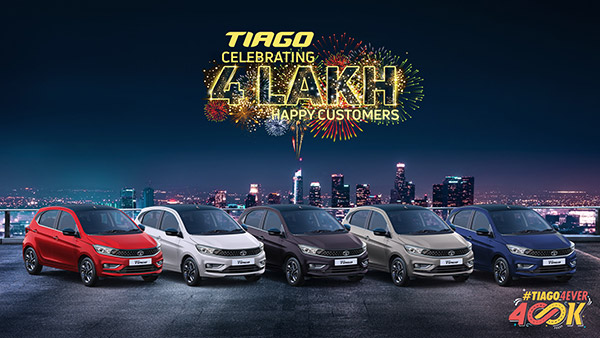 To mark the occasion, Tata Motors has also launched the #Tiago4ever campaign. Let us tell you that Tata Tiago was first launched in the Indian market in the year 2016 and Tata Tiago is the first car of the company to achieve this feat in the shortest time.

At present, the company is selling the Tata Tiago in two versions, which include the Tiago and the Tiago NRG. The company sells this car only with a 1.2-litre BS-6 compliant petrol engine. Also, a total of 14 variants of Tata Tiago are being sold in the Indian market.

Commenting on the achievement, Rajan Amba, Vice President (Sales, Marketing and Customer Service), Tata Motors Passenger Vehicles Ltd said, “This is indeed a historic milestone for Tata Motors, as the Tata Tiago marks this milestone. It is the first car to be completed in less time.”

He further added that “Tata Tiago has been a key product in our Turnaround 2.0 strategy and since its launch has been able to capture a large market share in the most crowded segment in the auto industry. Tata Tiago is a huge favorite amongst the youth. has become an option.”

He further added that “This is because the car is a stylish, feature-loaded and safe car with more than 60% of the sales coming from first time buyers. The recent launch of Tiago NRG and Tiago CNG has gained immense popularity among potential buyers. of it.”

Rajan Amba said, “We are confident that the Tata Tiago will continue to play an integral role in our new Forever range and enhance our market performance in the Indian auto industry.” Let us tell you that Tata Tiago has managed to get 19 percent market share in its segment.

Along with this, the company recently launched the i-CNG variant of this hatchback. With its 4-star Global NCAP crash test rating, the Tata Tiago is one of the safest hatchbacks currently on sale in the country. The company is selling this car between Rs 5.22 lakh to Rs 7.67 lakh (ex-showroom).