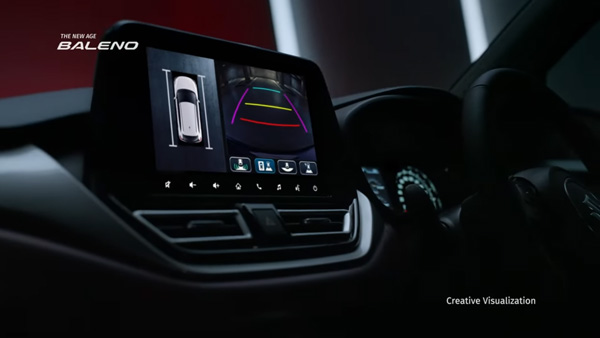 As per the teaser, the Baleno facelift gets a massive 9-inch SmartPlay Pro+ touchscreen infotainment system. According to the information, this system has been developed jointly with Toyota and it is equipped with features like wireless Android Auto and Apple CarPlay.

Talking about the facelift model, it could get a redesigned front grille with LED headlamps and a slimmer front grille than before. Apart from this, the rear part of the car may also come in a completely new design. In another teaser, the company gave a glimpse of the projector headlamp and split LED tail light given in the new Baleno.

According to the information, a floating infotainment screen will also be given in the dashboard of the new Baleno. Apart from this, the cruise control system will also be available with the controls mounted on the new steering wheel. The Baleno facelift will take on the Hyundai i20, Tata Altroz, Honda Jazz and Volkswagen Polo after launch.

Maruti will not change the engine of the new Baleno. Currently, the Maruti Baleno is made available in one engine option. It is a 1.2-litre engine that produces 83 Bhp of power and 113 Nm of peak torque. This engine comes mated to a 5-speed manual and CVT gearbox.

Better steel body panels will be used in the new Baleno, which is expected to be stronger than before. This car can be offered with new alloy wheels, interior fabric, interior color theme, dashboard, comfort and safety features.

The company has increased the prices of all its models by 4.3 percent from January 2022. The cost of vehicles of the company is being adversely affected due to increase in various input costs. Therefore, the company is trying to mitigate the impact of the additional cost through price increases.

The company sells a range of models from the Alto hatchback to the S-Cross SUV, which are priced between Rs 3.15 lakh and Rs 12.56 lakh. The auto major has hiked its vehicle prices thrice in the last year. The company had grown by 1.4 per cent in January last year, 1.6 per cent in April and 1.9 per cent in September, taking the total to 4.9 per cent.

According to the company, the company was forced to hike prices in the last one year due to increase in the cost of steel, aluminium, copper, plastic and essential commodities. Last month, MSI’s senior executive director (marketing and sales) Shashank Srivastava said the company’s material cost, which accounts for about 75-80 per cent of the OEM’s cost structure, has gone up.