300 state-of-the-art electric buses to be launched on the roads of Bangalore, tender process started 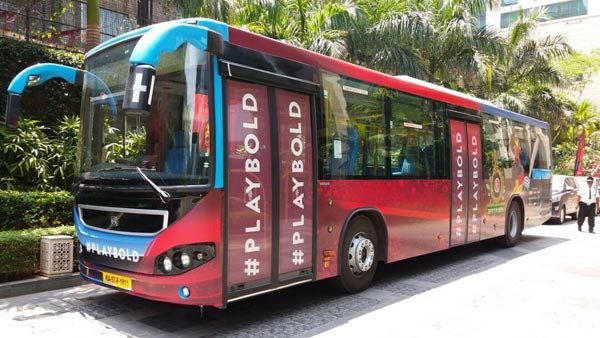 A prototype of the bus was brought to the BMTC headquarters on Friday for its design approval by the authorities. Hundreds of buses are likely to hit the roads next month once the design is cleared by the authorities. The 40-seater two-door bus has CCTV cameras all around it.

According to The Hans India, BMTC will introduce around 300 such e-buses in the city by October this year. The company will set up battery charging stations for which three BMTC depots and four stations have been identified. The management will be handled by the contract company itself and BMTC will pay to the company at the rate of per kilometer. The bus is designed to be environment and handicapped friendly.

BMTC had started the tender process for procuring 300 electric buses on contract basis in September 2019. Due to delay in this process, tender was invited in February 2020 for procurement of 90 electric mini buses for metro feeder service under FAME India project.

JBM Company has already contracted and supplied 90 buses which are plying in the city. If 300 buses are added to BMTC, the corporation will have a total of 390 electric buses.

The objection raised by the employees is that since companies provide drivers for these buses, the employment of so many people will go to the private sector. The central government has decided to provide electric buses in 9 major cities of the country to promote the concept of e-transportation under the Grand Challenge scheme. The BMTC Management Board has agreed to buy 1,500 buses under this scheme.

The Government of India-owned company, Convergence Energy Services Limited (CESL), with the help of World Resource Institute India (WRI India), has come up with an idea to deploy 50,000 electric buses (e-buses) in 25 states of India by 2030. Discussion has started.

CESL has started the process of deploying 5,450 e-buses in five cities – Bengaluru, Delhi, Hyderabad, Kolkata and Surat. Electric buses procured on tender based on contract model will be 27 per cent and 23 per cent cheaper than diesel and CNG buses respectively. CESL will prepare the data of old buses in these five states, after which these buses will be replaced by electric buses in a phased manner.

Sales of electric vehicles in India are growing rapidly and a network of charging stations is also being developed for this. According to the vehicle portal of the Union Ministry of Transport, more than 10.60 lakh electric vehicles have been registered in the country. At the same time, a total of 1,742 charging stations are operational in different states of the country.