27 people were riding in an auto, the police were stunned by the count, people said- ‘should get the award’ 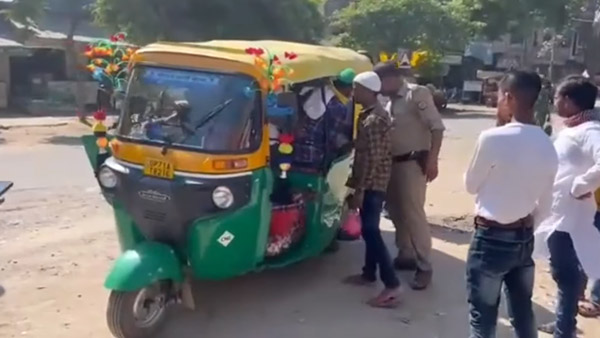 There were a total of 27 people in the auto including children and adults, some of whom were sitting on the seat and others were climbing one on top of the other. During interrogation, the police came to know that all the auto riders were going back home after offering Bakrid prayers in Bindki.

Taking action, the police seized the auto rickshaw and sent it to the police station. At present, the people of the area are discussing how 27 people would have been seated in an auto rickshaw. Let us tell you, this video is becoming very viral on social media and people are giving their feedback on it.

According to Fatehpur Police, a challan of Rs 11,500 has been deducted while taking action on the auto driver. People are giving their feedback after this video went viral on social media. This video has been shared by Supreme Court lawyer Ashwini Upadhyay, which has been viewed by more than 2.5 lakh people so far.

Commenting on this video, a user has written that for this feat of the auto driver, his name should be recorded in the Guinness Book. At the same time some people are saying that now the government should declare auto as a bus.

Another Twitter user wrote that we should learn the skill of space management from this auto driver. Another user wrote, “This incident is surprising and disturbing. We should take population control measures soon.”

Another user wrote, “27 passengers in a three wheeler auto rickshaw. This extraordinary feat can only be seen in a wonderful land of India.” Let us tell you that another picture is going viral on social media in which a person is working on a laptop while sitting behind a moving bike. Read here to know more about this news.