2022 Maruti S-Presso vs Renault Kwid: Which car is best between Maruti Suzuki S-Presso and Renault Kwid? Know the price and all the features 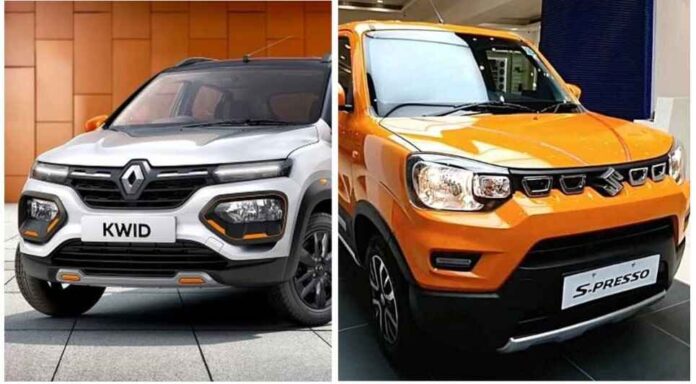 Best Car: The S-Presso is getting a tough competition from the Renault Kwid. The Kwid came to India in 2015, but its facelift version was launched in 2019 with many changes. Since then it has gained a good momentum in the Indian market. Let us know who is heavy on these two cars.

Know Renault Kwid and Maruti S-Presso Comparison: Maruti Suzuki S-Presso was launched in the Indian market for the first time in 2019. It has been performing well since then due to its great looks, SUV-like design, affordable price and well equipped cabin. However, the S-Presso is constantly getting a tough challenge from the Renault Kwid. Although this hatchback car came to India in 2015, but in 2019 its facelift version was launched with many changes. Since then this car has gained a good momentum in the Indian market. This year also some changes have been made in its model. Let us tell you who is heavier in these two cars.

2022 S-Presso price starts at Rs 4.25 Lakh and goes up to Rs 5.99 Lakh. On the other hand, talking about Kwid, its starting price is Rs 4.64 lakh, while its top-end variant comes up to Rs 5.99 lakh. This is ex showroom price. In comparison, the base variant of the S-Presso is Rs 39,000 cheaper than the Kwid. However, both the top-end models cost the same.

who is heavy in the engine

The S-Presso is currently available only with a petrol engine in the market. It is currently powered by the 1.0-litre, K12C engine, which was updated in 2022. This engine generates 68Ps and 90Nm of peak torque. It comes with 5 speed manual gearbox or 5 speed AGS. The company claims that it gives a mileage of 24.12 to 25.30 km on 1 liter of petrol. Now talking about the Kwid, it is available with 2 engine options. The first is the 0.8 liter unit and the second is the 1.0 liter unit. The 0.8 liter engine generates 54 Ps and 72 Nm of torque, while the 1 liter engine generates 68 Ps and 71 Nm of torque. Both the engines come mated to a 5-speed manual standard gearbox. Apart from this, the option of a 5-speed AMT gearbox is also available with the 1-litre engine unit. It gives mileage of 20.7 to 22 kms on 1 liter. Although both are similar in terms of engine,

Both the cars are very well designed in terms of their respective segments. Both come with digital instrument cluster, electrically adjustable ORVMs, manual air conditioning, keyless entry, dual airbags, ABS with EBD, overspeed alert and rear parking sensors. The Kwid gets an 8-inch touchscreen infotainment system, while the S-Presso gets a 7-inch unit. Both Android and Apple Auto support Car Play. Apart from this, the Kwid also comes with all four power windows, LED tail lamps, LED daytime running lamps and a rear parking camera.

who has the upper hand in dimensions