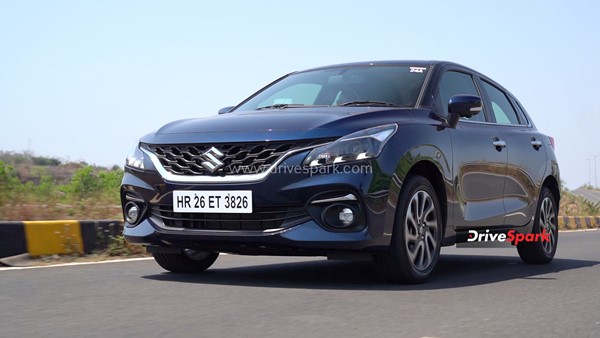 So far 9 lakh Balenos have been sold and now it is time to launch the new generation. The new Baleno was being seen testing since last year and on 23 February 2022, Maruti Suzuki has launched the Baleno.

Is this Baleno like the old one? Do its fancy features make it value for money? To know the answers to similar questions, we have driven Maruti Suzuki Baleno in Goa and have brought its information for you.

Ever since it was launched in India, it has been brought with an attractive design. In such a situation, redesigning the 2022 model and not losing its attractiveness was a big task but the company has done it well.

It has a Nexawave grille which enhances the bold design. The grille is unique and it looks great. Its bumper has been given a new design and its design looks even more attractive. It has a lower grille and fog housing on both sides. Maruti Suzuki names this design language as Liquid Flow and it has become even better with the new model. Its design line can be seen in the bonnet and side profile.

Viewed from the side, a great shoulder line and sharp character line have been given. Its 16-inch alloy wheel looks even more attractive, its diamond cut dual tone alloy wheel has been given. Talking about the rear part, it will be known how mature the Baleno has become. It also gets split tail light design, LED taillight.

It has sloping roofline, spoiler. A great bumper has been given with stop lamp. Its chrome feels premium compared to before. The rear camera has been given on its chrome strip. Overall, the Maruti Baleno has become more attractive than before. It looks better and it’s hard to tell what else could have been done better in its design.

The biggest upgrades have been made to the interiors of the new Maruti Baleno. The cabin has been given a new layout and it comes with a new dashboard and some new segment first features. Maruti Suzuki says that this is a state of the art cabin which comes with smooth and natural flow. The lines which are visible outside and are also given in the cabin.

Black color has been given in the upper part of this dashboard and blue in the middle part, the silver stripe that separates these two colors is seen. It is also seen below the center AC vents and 9-inch infotainment unit. The 9 inch SmartPlay Pro+ infotainment is the highlight of this car.

It comes with Apple CarPlay, Android Auto connectivity which provides access to many features including navigation, your favorite music app etc. Connecting your phone to the system is very easy and it has an easy to use interface.

For sound, the speakers of ARKAMYS are provided with Sound Sense technology. In this, you can enjoy the sound according to you, it gets a great bass. Its speakers could have been of better quality. It has a 360 degree camera which is superb, its video quality is good and it impressed us a lot when we tested it.

It also gets Suzuki Connect, which helps you connect the car with your mobile and helps you enjoy many segment first features. With its help, you can operate headlight, hazard light, door lock, engine immobilizer separately.

With its help, it helps you to cool the cabin with the help of your phone, it has been given safety features like vehicle tracking, geofencing, vehicle alert etc. The new Baleno comes with Amazon Alexa and Smartwatch connectivity which helps in providing voice commands to the car.

Talking about the dashboard, automatic climate control is given below the blue element. The center console is very simple, with the luggage storage space in front of the gear lever. It has a handbrake lever at the rear and comes with a center armrest.

The steering wheel is new and seems to be inspired by the Swift. In this, controls have been given for audio, voice command, cruise control. It has the facility of tilt and telescopic adjust.

The digital-analog instrument cluster has been given behind it. Its tachometer and speedometer are analog and the MID provides a lot of information. It provides Distance to Empty, Average Mileage, Current Mileage, Trip Meter, Odometer etc. It also has a heads up display.

The button for raising the HUD is provided, which provides various information to the driver. Overall, the material of the new Baleno is impressive. Additionally, it comes with a host of features and advanced technology which makes the cabin one of the best in its segment.

It is powered by the same 1.2-litre petrol engine that produces 88.5 bhp at 6,000 rpm and 113 Nm of torque at 4,400 rpm. From this, the CVT gearbox has been removed and it has been given AMT, we have driven both the gearbox variants of it.

As soon as you start this engine, it feels very smooth and it starts running as soon as the gear is engaged. Its low end grunt is superb, while its mid range is also great and picks up speed fast. It makes good sound up to 5,000 rpm.

The K-series engines are known for strong mid-range and low-end driveability and the Baleno offers the same. This hundreds figure is easy to reach and it’s easy to stay there. It may take some time to overtake at high speed and the engine is fine for its size.

Talking about the gearbox, the manual gearbox is great. Shifting is extremely smooth and throws very quickly. It makes the driving experience dynamic and engaging. Maruti car is good with petrol engine with clutch pedal, it is very useful in stop and go traffic.

Its 5 speed AMT is the smoothest, though performance has been compromised to get more mileage which is easily recognized. There is slight lag in shifting and does not shift immediately.

The company has also changed its suspension setup and offers a dynamic driving experience. The company has also improved its braking performance, although we felt that the initial bite could have been slightly better but changes can be felt compared to the old model.

– Back Type-A and Type-C charger

Maruti Baleno has always been a car that has been loved by the customers and now with the new Baleno, Maruti Suzuki has taken it to a whole new level. It retains the beauty of the old model but has become very modern in terms of features which are not seen in the segment ahead of it.