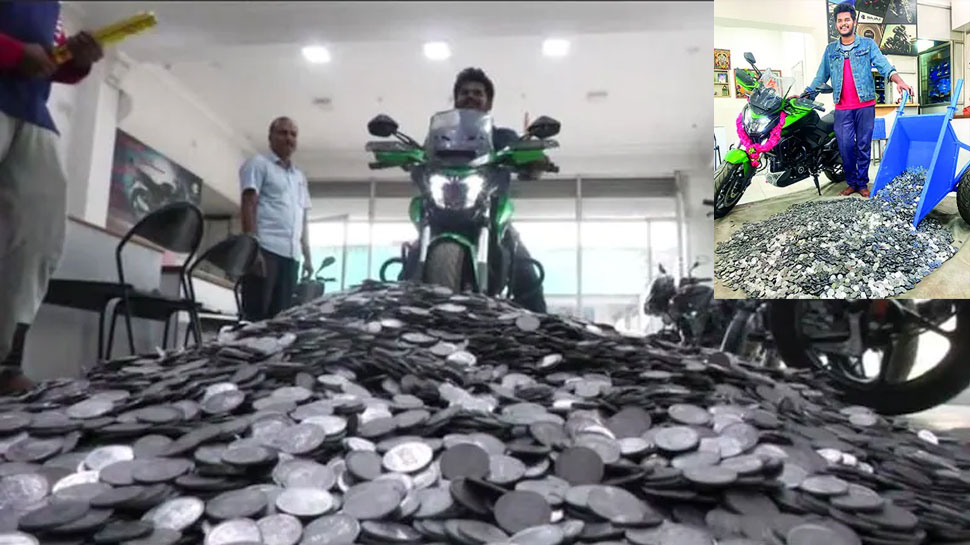 A man living in Salem, Tamil Nadu has bought his dream bike by depositing coins of Re 1 for three years. He told that he reached the dealership to buy the bike with coins worth Rs 2.6 lakh. The dealership has taken 10 hours to calculate this amount.

New Delhi : You must have heard the saying that fills the pot drop by drop, but today you can see it even though it is being realized. One such case has come to light in Salem, Tamil Nadu where resident V Boobathy has bought his favorite bike Bajaj Dominar 400 by adding pie-pie. Here we mean something else by pi-pie.. Actually Bubathi added 1 rupee coins daily for 3 years and bought this bike, the funny thing started when the dealership started counting his coins. There were so many coins of Re 1 that the dealership took 10 hours to count it. This information has been given by the manager of India Agency, Mahavikrant.

Bubathi is a graduate of BCA and before starting his YouTube channel 4 years ago, he used to work as a computer operator in a private company. Three years back he had dreamed of buying a Bajaj Dominar 400, but at that time the bike was worth Rs 2 lakh and he did not have that much money. He started collecting coins of one rupee each from the amount received through his YouTube channel so that he could fulfill his dream. “I took coins in exchange for notes from temples, hotels, even tea stalls for nearly three years,” Bubathi said.

There was no information about the price increase

Just before he bought the bike, he came to know that the on-road price of Bajaj Dominar 400 is going up to Rs.2.6 lakh. Then he started counting the coins he had deposited and luckily this amount turned out to be enough to fulfill his dream. With this amount, he reached Mahavikrant, the manager of Bharat Agency and asked to pay the price of the bike in coins. Initially, the manager refused and said that the bank charges a commission of Rs 140 for counting Rs 1 lakh on 2 thousand rupees note, but later he allowed it after seeing Bubathi’s dream being fulfilled.